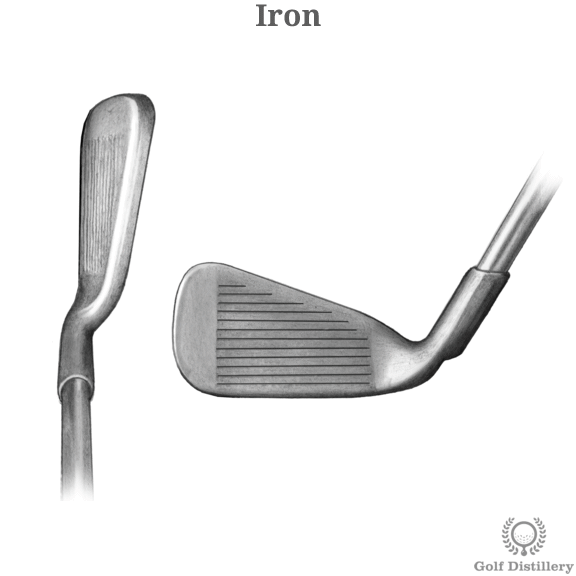 Irons are golf clubs that are designed to send the ball on distances between that of fairway woods and hybrids and that of wedges. This category of clubs is usually the most represented in a golfer’s bag – oftentimes at 7 clubs and classically numbering from 3-iron all the way to 9-iron.

Their intended use is to hit the ball onto the green, from where it can be putted. As such, they are often used for the first stroke on par-3s, and on approach shots to the green from par-4s and par-5s. 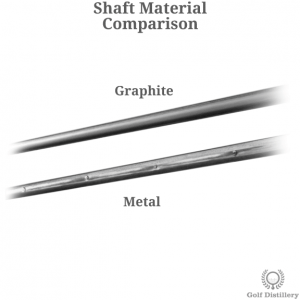 In the very beginning of the game, golf club shafts were made from hardwood. In modern club design however, the shafts of irons are predominantly made from steel, although a sizable segment now feature shafts made from graphite and both are readily offered by club manufacturers.

It should be stated that graphite shafts are lighter than their steel counterparts but are also more flexible, generally speaking. Better golfers with faster swing speeds will tend to prefer steel shafts as they are thought to provide more feedback to the hands.

In contrast, graphite shafts will usually be preferred by golfers with lower swing speeds and those with more limited body strength. 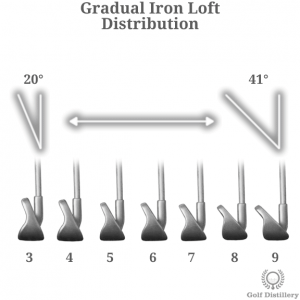 The loft (or angle of the clubface in relation to a vertical line) of irons climbs higher as does the number on the sole of the club. Or in other words, the loft will be lower on lower-numbered iron than on high-numbered irons.

These slight variations in lofts allow the golfer to be able to select the right club that will carry the ball over the desired distance, i.e., the specific distance between the ball and the intended landing area.

Here is an example of an iron distance chart for a young golfer (your own results may vary):

Irons are Being Squeezed by Hybrids and Wedges 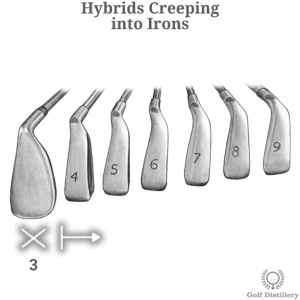 As indicated in the hybrids section of this website, the number of irons found in golfers’ bags has declined over time from its traditional levels. Whereas one would classically always make room for irons 3 through 9 the introduction of hybrids has come at the expense of long irons.

On the other side of the spectrum, the multiplication and specialization of wedges has also put pressure on the number of irons golfers now carry. Whereas it was traditional for golfers to use two wedges – pitching and sand – the introduction of gap and lob wedges have forced golfers to make tradeoffs in order to still comply with the 14 club limit, again often at the expense of the long irons.

Types of Iron Clubhead: Cavity Back vs Muscle Back (Blades) 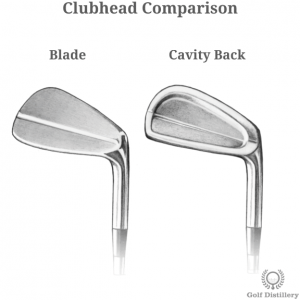 Irons either belong to one of two clubhead categories: the cavity back or the muscle back.

Muscle back irons features smaller head sizes than their counterparts and are generally made using the forging process.

Cavity back irons usually feature larger heads that are made possible by the hollowing out of the back of the clubface.