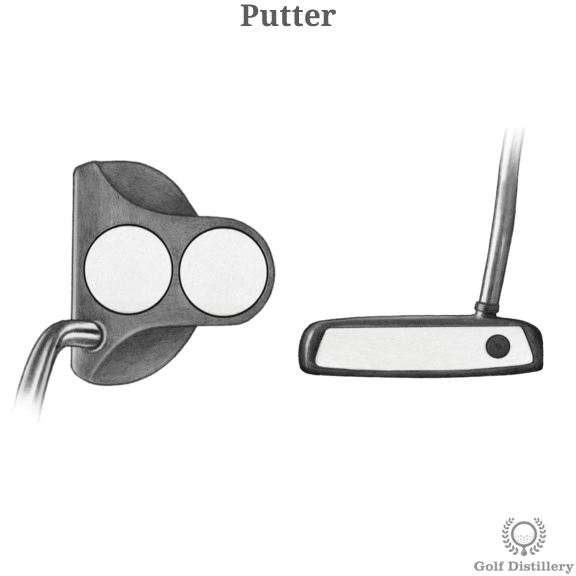 A putter is the type of club a golfer will normally use to finally hit the ball into the cup on every hole. The face of the club is flat (or close to) and it is designed to get the ball rolling forward rather than lift it from the ground and take flight.

Traditionally the putter was the shortest club in a golfer’s bag but that has changed since the introduction of the belly putter and the long putter (since ruled inappropriate for competition if anchored to the body). There are several nicknames to designate the putter, notably the Texas wedge and the flat stick. 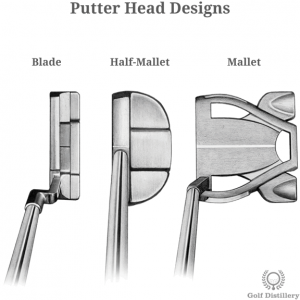 The more traditional putter clubhead design is that of the blade putter, otherwise known as the anser putter which was made very popular by the club manufacturer Ping. Nowadays however there exists a panoply of putters whose head type fit into the mallet category. And then there are those that fit somewhere in between the two.

Blade-type putters are usually lighter whereas mallet-type putters are much heavier, thanks to their more complex and material-heavy designs. Heavier putters should produce longer rolls compared to lighter putters while using the same force. 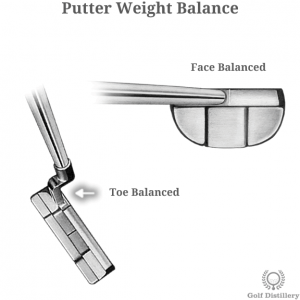 Putters are also different in how they are balanced. When you hold them in balance over your index finger some putters will see the face stay level and looking up into the sky. Those putters belong to the face-balanced category.

The putters whose clubface points down when held on balance over your finger are of the toe-balanced category. 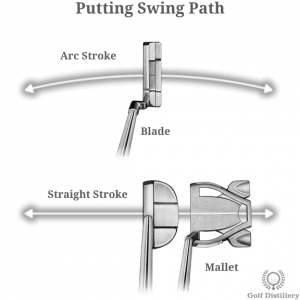 Blade putters are generally toe-balanced and as such are a better fit for golfers who prefer an arc stroke for their putting swing path.

Golfers who prefer to use a straight back and forth stroke are probably best served by mallet or half-mallet putters.

One of the advantages of mallet putters is that they are designed to be more forgiving when the stroke is not perfectly straight back and forth or otherwise produced by inconsistent strokes. 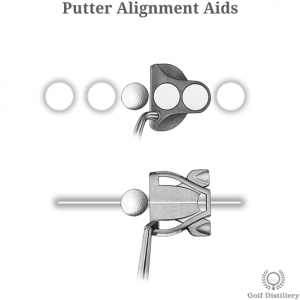 The larger sizes inherent with mallet putters has allowed for the integration of putting alignment aids right into the clubhead.

Odyssey introduced the very popular two-ball putter that featured white circles that mimicked golf balls and promoted a straight back and forth putting stroke.

Similarly other mallet putter manufacturers make use of the extra clubhead real estate by featuring alignment lines, helping golfers line up for a putt straight at target.

Offset vs No-Offset and Heel vs Centre Shafted Putters 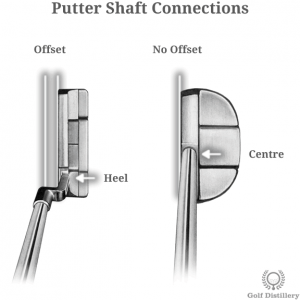 Putters can also feature varying degrees of offset with some clubs positioning the shaft way in front of the leading edge of the club. Offset can help promote keeping the hands ahead of the ball, at address and at impact.

Other putter designs feature a shaft that plugs right into – but not in front of – the face of the club. These putters have no offset at all, which can lead to the ball bouncing off a little bit after being hit.

Insert vs All Metal Putter Face 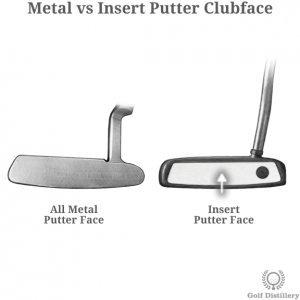 Putter innovation has also creeped into the actual face of the club. Whereas putters traditionally had a very basic flat face modern putters can now incorporate an insert.

In addition to incorporating an insert into the face of the putter with varying degrees of softness club manufacturers can also tweak the groove pattern design.

Again, traditionally putter heads were flat and made of metal but that it no longer always the case. Certain club manufacturers design elaborate groove designs into the face of their putters, hoping to improve the feel at impact and consistency in the roll of the ball. 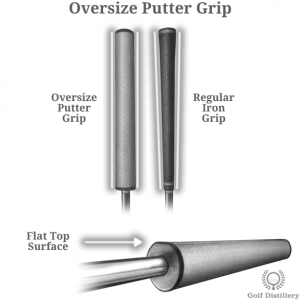 Golfers benefit further from putters in that they are  allowed to use different types of grips for that category of clubs.

So whereas irons, wedges and woods need to have stricter conforming grips, the putter category allows for much more flexibility.

Notably, putter grips can be much larger in diameter, feature no taper (same diameter at the top and at the bottom) and can even have a flat surface where the thumbs lay.

All of these characteristics are available in the quest for better feel – less hand movements – and ultimately better strokes and putts.

Finally. the putter is also the club that a golfer will normally use most often during a round. In fact, if a golfer was to shoot par over the length of the round and play according to theory, that golfer would have used his putter on 50% of his shots, i.e., twice per holes x 18 holes = 36 strokes, out of the par-72. This fact helps explain why club manufacturers are able to command relatively high prices for a single club. Indeed, putters from renowned brands – such as Scotty Cameron – sell for several hundreds of dollars in many cases.