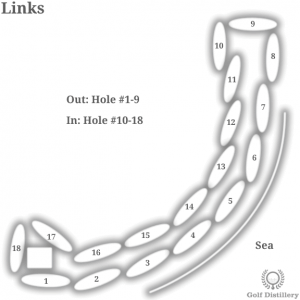 The term links refers to a type of golf course usually associated with those found in Scotland along the coast of the sea. Such courses are located inside big sand dunes from which no or very few tall trees will grow. Instead, tall grass will be prevalent and whenever bushes do grow they normally don’t reach higher than a few feet from the ground. Types of bushes found on such courses are often of the gorse variety. A pure links course will be made out of two nine holes that are referred to as out, and in. The first 9 – the out – will feature 9 holes along the coast going away from the clubhouse and the second 9 – the in – will feature 9 holes that runs along the first 9 back towards the clubhouse.

The origin of the term can be found in that the appellation links would historically refer to the stretch of land located between the sea – with its sand dunes – and the farmable land located inland. Because courses were first developed in that stretch of land that links the sea to the inland, the term stuck. 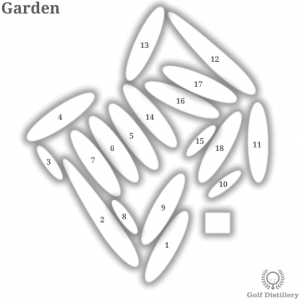 The term refers to a type of golf course that is usually found in North America. It is often used in contrast to the links appellation. Indeed, contrary to those, courses said to be of the garden variety are not located along the coast but rather well inside the mainland. Again in contrast, they also feature lots of green grass, trees and in many cases water in the form of ponds, lakes, creeks, etc.

Such golf courses will normally see holes #1 and #10 start from near the clubhouse and holes #9 and #18 finishing near the clubhouse. That way, golfers finishing up the first nine holes will have the option of stopping by the clubhouse – or snack bar – before proceeding with the rest of the round. That setup also gives the option of starting a round on hole #10 and completing the back nine ahead of the front nine, provided that the course allows such permutations in order of play.

The origin of the term can be found in the fact that such courses can feature lush flower beds and plants around golf holes. The Augusta Golf Course, home of the Masters, is a prime example of a garden-type course. 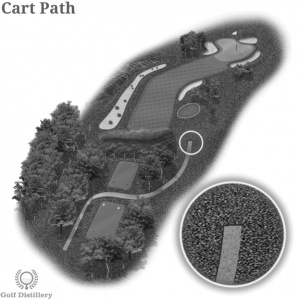 A cart path is a narrow road that defines the route where carts should travel as it transports golfers along the course. They can be delimited by rope in the most basic form or built from construction material such as gravel, or event pavement.

Golf architects often build them around teeing grounds and putting greens in order to make sure carts do not go near these more delicate grass environments. Otherwise, in wet conditions courses can instruct golfers to always follow the cart path and never venture out into the rough or fairway using carts. 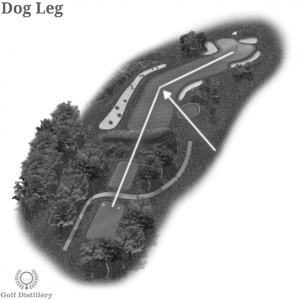 The term dog leg is used to characterize the layout of a golf hole that angles sharply to one side. In contrast to a straight hole, one with a dog leg will see the fairway take a sharp turn to the left or right at some point before reaching the green. Specifically, a “dog leg left” hole will see the green located to the left of a straight line from the teeing ground while a “dog leg right” will see it located to the right.

Golfers will be smart to take notice of such characteristics before teeing off as the ideal landing area of a shot will be impacted in relation to which way such a hole turns. Indeed, a golfer might find himself unable to reach the green in two on a dog leg par-4 if he were to hit his drive too far to the left of the fairway. Indeed, he may find his direct line to the green blocked by the edge of a tree line.

The term turn refers to the moment in time between the 9th and 10th hole during a golf round. It essentially marks the midpoint of a round. The origin of the term is found in the layout of links-type courses. Indeed, a golfer on a links course will proceed forward through the first nine holes before ‘turning’ back towards the clubhouse for the 10th and the rest of the back-nine.