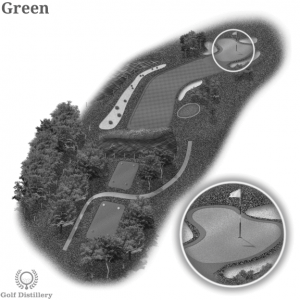 The green – or putting green – consists of the area at the far end of a golf hole where the grass is kept shortest and on which golfers are meant to use a putter. The green represents the general target area of a golf hole as it contains the actual hole inside its perimeter. 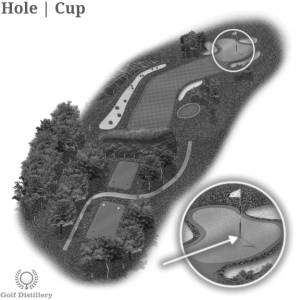 The hole – or cup – consists of an actual hole in the ground that is dug somewhere on the putting green, on each of the different golf holes. The term refers to the ultimate target, representing the final destination of a golf ball on any golf hole. Indeed, when the golfer’s ball falls in the cup it signals the end of that hole, after which the golfer is to compute how many strokes it took him to reach this point.

Hole can also refer to one of the 18 holes found on a normal golf course. In that case, a hole corresponds to the space between the tee teeing ground and the green, and its close surroundings. 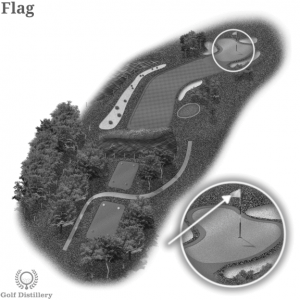 A flag consists of a piece of fabric that is secured to the top of the flagstick and is used to indicate the location of the hole on any given putting green. It is affixed to the top of the flagstick in order to be visible from far away so that golfers can see where the hole is located as they line up for their approach shot. Usually flexible in its consistence the flag will also serve to give indications regarding direction and strength of the wind near the green. In most instances, flags will either feature the logo of the course or the hole number, or both.

Famously, the flagsticks at the Merion Golf Club do not hold flags in place but rather hold a small wicker basket at the top end. While these may not provide golfers with wind direction and strength, they do provide for a very unique – and signature – look to the course. 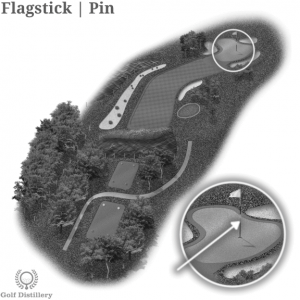 The flagstick – or pin – is a long and rigid pole usually made of metal that is held inside the middle of the cup. It is used to provide a visual aid to golfers and to give an indication as to the relative position of the hole inside the green. The otherwise difficult object to discern from afar is made more visible through its flag, secured at the very top.

The pin is meant to be removed from the cup when golfers reach the green and proceed with putting. Modern flagsticks will contain embedded objects made of reflective material that will be used by ranger finders (laser guides) to assist in determining yardages to the cup. 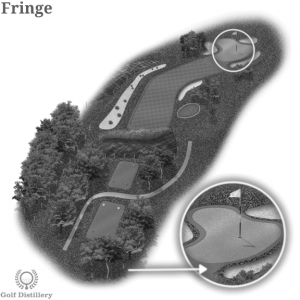 Depending on their skill levels and the dynamics at play for an upcoming shot, golfers usually elect to either putt or chip from the fringe.

In addition to bending through its own weight, shorter blades of grass such as those found on putting greens can also display grain. Indeed, greenskeepers will bend the grass through a process called rolling in order to make balls run faster on the green. Otherwise, for courses that are located on the slope of a mountain or hill, grain will also develop through rainfall as the water droplets will drain down the hill, essentially combing the grass in the process.

What does “against the grain” mean?

A shot that goes against the grain is one where the blades of grass are pointing towards the ball and away from the target. Such a putt will travel slower than otherwise.

What does “with the grain” mean?

The opposite of against the grain, a ball that goes with the grain is one where the blades of grass are pointing towards the target rather than towards the ball. Such a putt will travel faster than otherwise.

How does grain affect golf shots?

Grain affects a golf shot in a number of ways. For a ball that lies in the rough, seeing the line to the target go against the grain will result in the grass grasping the clubhead as it travels towards the ball for impact. As a result, the distance achieved on the shot will be negatively impacted. In contrast, a ball that sits neatly with the grain will reward the golfer with a much easier shot as the clubhead will slide freely on top of the grass blades.

For a ball located on the green, a putt that goes against the grain will travel slower than one that goes with the grain. This is explained by the fact that as the ball rolls towards the hole it must travel against the tips of countless blades of grass. Assessing grain before putting is also important as you get nearer to the hole. Indeed, a golfer who is facing a short putt – and a short swing – but who fails to realize he is putting against the grain will not compensate and will risk seeing his ball never reach the hole. 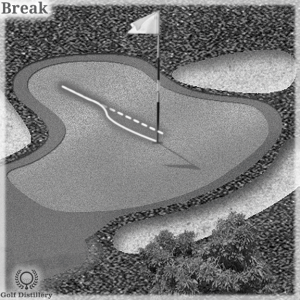 Break refers to the direction a ball will take when rolling on the green. Putting greens often feature slopes or otherwise uneven surfaces that add difficulty to the putting game. A golfer that finds such a deviation in elevation in the path of a putt will need to make adjustments to the initial direction he will aim. He will do so in order to incorporate the break into his putt.

The intensity with which a putt will break will be determined in part by how fast the ball will roll. Indeed, a slower ball will be impacted by the break much more than would a fast one.

More on: Putting Tips – How to Read Greens