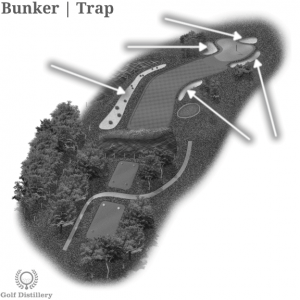 A bunker – or trap – is an area on the golf course that is filled with sand instead of grown with grass.

Similarly to other specific types of hazards, a bunker will take the form of a depression in the ground but differently than a water hazard will contain sand rather than water.

Traps can be placed near the green, inside or on either side of a fairway, or can consist of large areas outside of the rough, depending on what the golf architect wanted to accomplish. 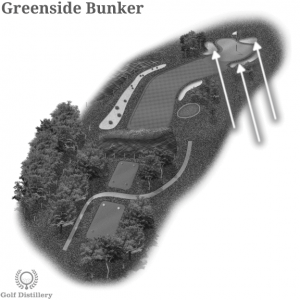 A greenside bunker is a type of trap that is located near the perimeter of the green.

It is so placed in order to penalize golfers who hit imprecise approaches onto the putting green. They can also be placed with the objective of catching balls that would otherwise roll into even worse positions, such as into water hazards or out of bounds, effectively providing golfers with a backstop.

A golfer whose ball will come to rest in such a bunker will not be allowed to ground his club at address and will instead need to hover his club up behind the ball. In order to get the ball out golfers will normally execute bunker shots using high lofted clubs, such as a sand wedge.

More on: How to Hit a Bunker Shot 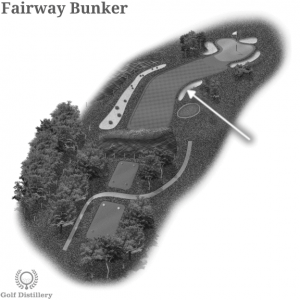 A fairway bunker is a type of trap that is situated away from the putting green.

As the name suggests, it is instead placed alongside – or even within – the fairway of a given hole. They are so placed in order to penalize golfers who hit errant drives (and seconds shots on par-5s) or generally to add difficulty to a target line that crosses it. Such bunkers can also be placed as useful visual guides, providing golfers with a target of where to aim.

Unless such a bunker is very deep golfers needing to strike from within one can normally still execute a shot that will travel great distances. Similarly to other hazards though the golfer will still not be able to ground his club at address while setting up for a shot.

More on: How to Hit a Fairway Bunker Shot 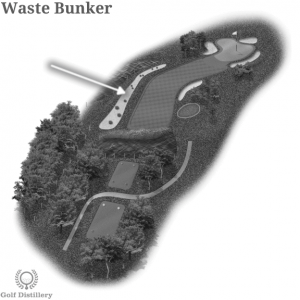 A waste bunker consists of a fairly large area where sand is the main surface ingredient.

When present, such bunkers oftentimes define the outer edges of a golf hole and begin where the rough ends. In some cases, waste bunkers even replace rough altogether and borders fairways directly, or after a margin of first cut.

Because it is not technically a type of hazard, golfers are allowed to ground their clubs while setting up for a shot at address, in contrast to other types of bunkers. In some cases golf course may elect to enact local rules in order to clearly define the correct course of action. 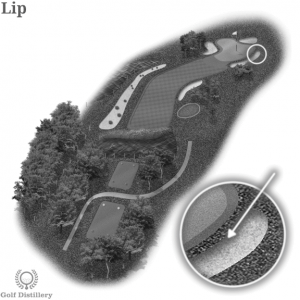 The lip consists of the edge of a bunker where the sand meets the grass.

Because bunkers are effectively holes sin the ground, the level of the ground of the grass surrounding it is naturally higher than the level of the sand, even as the two meet. As a result, a small step is seen along the perimeter of the bunker which is called the lip. That small step can take drastically different dimensions in Scotland notably, where the lips famously look more like walls than subtle edges.

Whenever a course features particularly punishing lips golfers will be wise to make sure an upcoming shot will send the ball high enough to clear the lip entirely. Indeed, lips tend to not allow balls to roll out, sending them back into into the bunker instead. Worst still, balls sent directly into a lip may become lodged within, providing for an almost impossible follow up shot.