In this section you will find the golf terms that relate to scoring – scores – in golf. 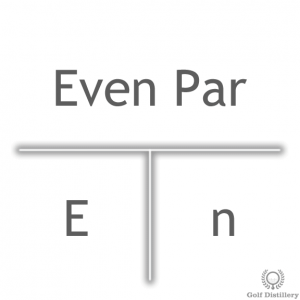 A par is obtained on a hole when a golfer uses a number of strokes that is in line with what is deemed standard. It is a score that golfers strive to match – if not beat – and is referred to as “even”, or “even-par”.

On the scorecard, a golfer can write down the letter ‘E’  to designate a par or alternatively can simply mark down the number of strokes that was required for that hole.

In addition to a score for a single hole, par can also refer to the number of strokes associated with an entire round of golf. For example, a course that is a par-72 is one where the standard score is 72. Or in other words, for that course in question, if one were to add all of the par numbers for each hole the total of those would be 72. 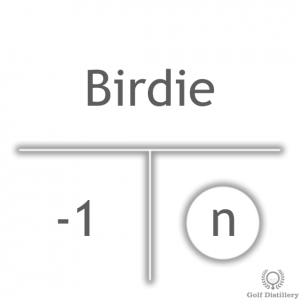 On any given hole, a birdie is obtained when a golfer uses one fewer stroke than is deemed standard.

On the scorecard the golfer who has hit a birdie will either mark his score as -1 or will put the number of strokes used inside a circle. 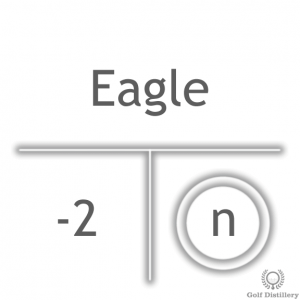 An eagle is obtained when a golfer uses two fewer strokes than is deemed standard for a given hole.

Or in other words when the golfer posts a score that is two score fewer than the par number. As such, a golfer that posts an eagle is said to be 2 under par on that hole. In practice, an eagle is achieved when requiring 3 strokes on a par-5, two strokes on a par-4, and 1 stroke on a par-3 for a hole-in-one.

On the scorecard a golfer who has scored an eagle will either mark his score as -2 or will put the number of strokes shot inside two circles. 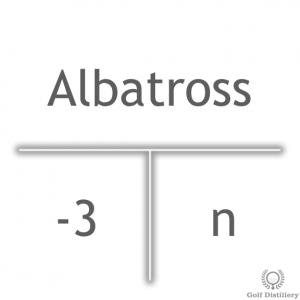 An albatross – or double eagle – is achieved when a golfer uses three strokes less than is deemed standard for a hole.

Or in other words when he requires three strokes fewer than the par number for that hole. As such, a golfer who scores an albatross is said to be 3 under par for that hole. In practice, this will happen for a score of 2 on a par-5, and on a hole-in-one on a par-4.

On the scorecard a golfer who has achieved an albatross will either mark his score as -3 or will put the number of strokes required inside three circles. 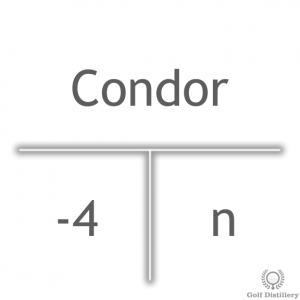 A condor is theoretically achieved when a golfer uses four strokes fewer than is deemed standard on a hole.

Or in other words when he requires four strokes fewer than the par number for that hole. It is an extremely rare event that can occur after a golfer scores a hole-in-one on a par-5. A golfer who claims to have made a condor is almost certainly lying.

On the scorecard a golfer who would hit a condor would mark his score as -4 or would put the number of strokes hit. 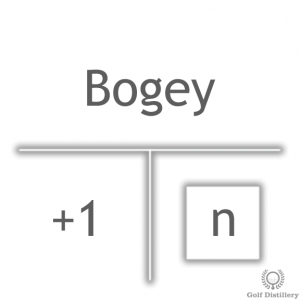 A bogey is obtained when a golfer uses one more stroke than is deemed standard for a given hole.

On the scorecard a golfer who has scored a bogey will mark his score as +1 or will put the number of strokes hit inside a square. 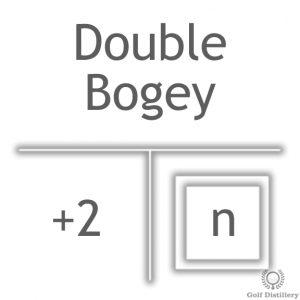 A double bogey is obtained when a golfer uses two strokes more than is deemed standard for a given hole.

On the scorecard a golfer who has hit a double bogey will mark his score as +2 or will put the number of strokes hit inside two squares.

When a golfer is successful in hitting his ball from the tee-box so that it falls into the hole in only one stroke he is said to have performed a hole-in-one, or an ace. On a par-3, an ace is equivalent to an eagle since it required 2 fewer strokes than is deemed standard, or below par.

Traditionally, for a hole-in-one to be considered valid another golfer must have witnessed it. In such cases, the golfer who scored the ace will usually conserve his scorecard and have it signed by the witness(es), as per tradition. He will also usually conserve the ball in question and may even decide to write a note on it to document the coup.

If he seeks to further follow tradition the golfer that scores a hole-in-one will make his way into the clubhouse bar after the round and excitedly inform his fellow golfers of his recent feat. He will then proceed to buying a round to everyone present and may even make that round a round of champagne if he is so keen.

Sentence: Jim played very well early and is already 2-up in his match after 2 holes.

Sentence: Gary seems overwhelmed early in his match against Jim and is already 2-down after 2 holes. 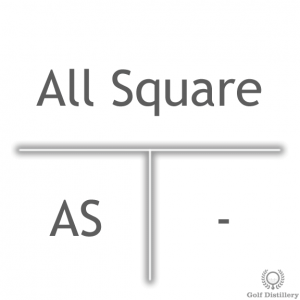 In match play a match is said to be all square when it is tied, i.e., when no player is ahead in the match. This can occur when neither golfer or team has managed to win a single hole. Otherwise, it can also occur when the number of holes won by each golfer or team is equal, or in other words when both golfers or teams have won the same amount of holes.

For example, a golfer that wins the first hole but loses the second one will see the match stand at all square as the two golfers tee up on hole #3.  Similarly, a match that sees the two first holes ties with no winner on either hole will stand as all square as the golfers tee up on hole #3. On the scorecard the scorer will usually use the initialism ‘AS’ if the match goes back to being all square.

Sentence: After a tight match that saw Jim and Gary exchanging the lead the match is back to all square after 17 holes.

In match play a golfer or a team is said to halve a hole when its score is identical to that of its opponent. In essence, it is a term used to indicate that the hole was tied. In addition to a single hole, the term halve is also used to describe a match that ends in a tie, with no winner which can be referred as a halved match. Note that this can only apply when the rules of the tournament or round allow for a match to end in a tie. Indeed, in many cases if a match were to stand at all square after 18 holes, extra holes of sudden death are played as long as needed in order to determine a winner.

In sentence: Thanks to that long putt Jim was able to halve the hole. After a tight match that saw both golfers exchanging slight leads the match ended halved, giving both players a single point. 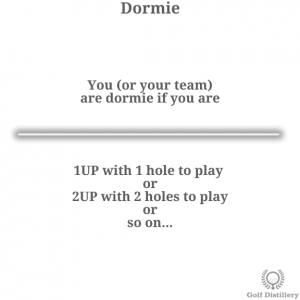 In a mistake heard frequently golfers will refer to the team that is losing as the team being dormie. That is not correct.

A good trick that will assist in remembering it correctly is to imagine the team with the lead to have the luxury of being dormant for the rest of the match without fear of losing the match. This of course only applies to matches that cannot go to extra holes in which case the dormie team could still end up losing in sudden death playoff.

Sentence: Being already dormie, Jim will seek to end the match early on #14 by matching or besting his opponent’s score on that hole.