The golf terms representing the many movements involved in a golf swing are broken down into sections on this page. 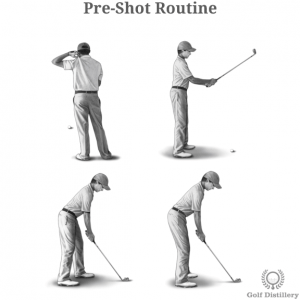 The pre-shot routine consists of the orderly sequence of actions that a golfer will undertake shortly before hitting a shot. These actions often include making a practice swing as well as taking a look at the target from behind the ball, gripping and waggling the club before finally addressing the ball. It can also include nervous ticks that a golfer might need to perform in order to get comfortable, such as lifting his shirt from his shoulder, looking at the target several times and so on.

Although it is overwhelmingly advised to develop a pre-shot routine, such a routine should not be allowed to contain too many and/or too lengthy processes. Indeed, as groups are usually made of four golfers who will usually hit between 70 and 100 shots during the course of a round, long pre-shot routines can result in a very slow pace of play.

In sentence: Jim’s playing partners really wish his pre-shot routine wasn’t so elaborate so that they could improve the pace of play and catch up to the group ahead. 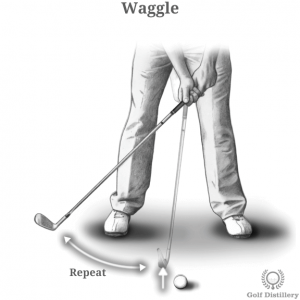 As an optional component of the pre-shot routine the waggle is accomplished just prior to the golfer beginning his swing, when the golfer’s setup is mostly in place.

During a waggle, the golfer will raise the clubhead from behind the ball and using his wrists will alternate between a cocking and uncoking motion, swinging the club gently back and forward at least a few times. In many instances the golfer will also simultaneously shift weight slightly between his feet, lifting his toes from the ground in order to find a comfortable standing position.

Although some would interpret the waggle as a nervous tick or as a way to calm nerves down, Ben Hogan recommended people use it as part of their golf swing prior to a long shot. As far as contemporary golfers go, Jason Dufner performs a very typical waggle before hitting his drives.

In sentence: Jim swears by the waggle, insisting that it helps loosen his wrists in preparation for a golf shot. 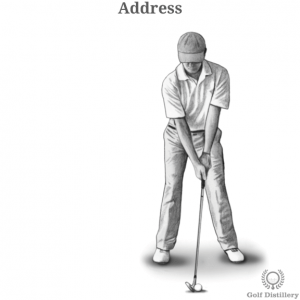 The stationary position of the golfer just as he is about to begin his swing. Normally – when he is allowed to – at address the golfer will be gripping the club and its clubhead will be laying on the ground just behind the ball, for a brief period of time.

Notably, in order to get into the address position, the golfer will have positioned his feet carefully in relation to the location of the ball, to the club in hand, and to the direction of the target. He will also be bending his knees a little to prepare for the upcoming athletic movement that is a golf swing. His hands and fingers will be carefully placed on the grip of his club and his upper body will be held rigid, titled forward. For a brief moment when all those will be held in place, the golfer will be said to stand at address, and will be ready to start the swing per se.

In sentence: At PGA Tour events fans are encouraged to remain silent whenever they stand near a pro golfer and especially when the golfer is at address, just before a shot. 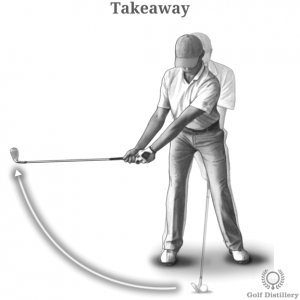 The takeaway consists of the first sequence of actions that begin a golf swing. During its course, the golfer will start to bring the club back and into the backswing. In the scheme of things related to a golf swing, the takeaway occurs between the address and the start of the backswing, when the club is parallel to the floor.

The takeaway consists mostly of the rotation of the shoulders with little movements seen in the wrists and hips.

In sentence: As part of his pre-shot routine and similarly to what his favourite golfer Mike Weir does, Jim will do a few practice takeaways and will carefully observe where he positions his club back. 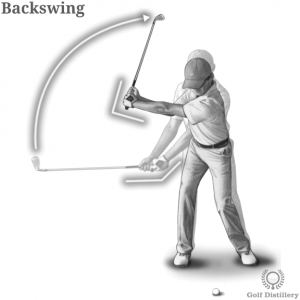 The backswing consists of the sequence of actions that takes place immediately after the takeaway and up to the point where the club will begin to reverse course and start moving back towards the ball, at the top of the swing.

During the backswing, hips are brought into the swing through their rotation and the wrists will hinge

In sentence: Jim was known amongst his friends to have a very smooth and slow backswing, similar to that of pro golfer Ernie Els.

Top of the Backswing 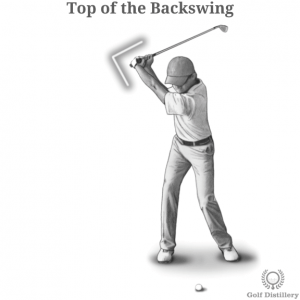 The top of the backswing – or top of the swing – consists of the transitional moment in time where the backswing ends and the downswing begins. It is more of a milestone than a process, representing the middle point between the first third of the swing that began at address and the second third that ends at impact (with the third one being the follow through).

How the golfer will hold his club at the top will provide clues as to the identity of the plane the swing took. Indeed, a swing that uses a low plane will be clearly identifiable through how the top of the backswing looks. The same holds true for a swing on a high plane.

In sentence: Jim practiced his swing in front of a mirror in order to examine the top of his backswing and determine if he is on plane. 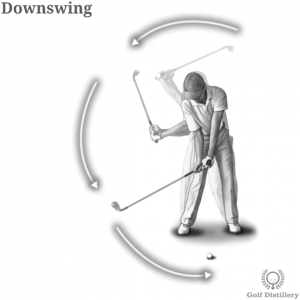 The downswing concerns the sequence of actions that immediately begin once the top of the swing is reached, as the club reverses course and begins traveling towards the ball. It ends when the clubhead has reached its lowest point, i.e., at impact.

In sentence: Jim seems to always remember to lead his downswing using his hips rather than his arms. 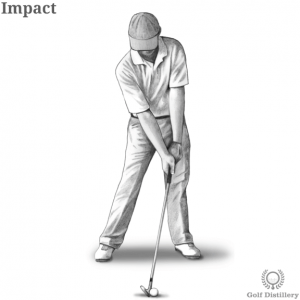 As the term strongly suggests, the impact consists of the crucial moment where the clubface strikes the ball. How the body and the clubface are positioned in relation to the ball and target will have immense repercussions on where the ball will finally end up. Indeed, if the club is found to be unintentionally open at impact the odds of seeing the ball land near the intended target will be diminished. Likewise for the opposite, i.e., for a closed clubface.

In sentence: Jim was unhappy with his ball striking today, noticing at impact that his clubs did not produce the sound he’s familiar with. 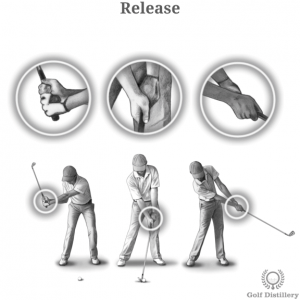 The term release refers to the transitional actions of the hands before and after impact. Indeed, during the backswing and downswing, the right hand will be trailing the left whereas in the follow-through, the left will trail the right. The sequence of movements involved in reversing those hands is called the release.

In sentence: Thanks to a lot of balls hit at the range, Jim was grateful to see his wrists releasing properly without having to think about it at all.

More on: Swing tips for the release and extension 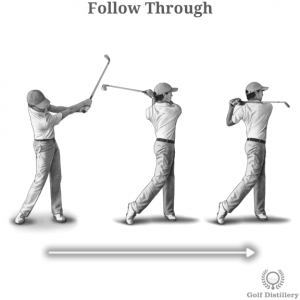 The term follow-through refers to the sequence of actions that take place after the moment of impact, as the club continues traveling even though the ball has been hit. It allows for the club to lose its momentum and energy until it finally comes to rest, on top of the golfer’s shoulders.

In sentence: Jim likes to finish his follow-through on his left foot, his upper body facing the target and his right toes pointing into the ground. 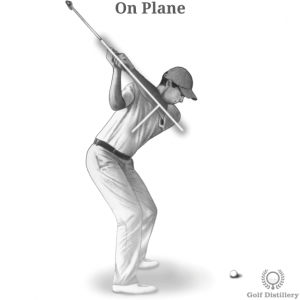 The plane refers to the trajectory that a club will go through during a golf swing, specifically between the point where it is initiated and the point where the clubhead will strike the ball at impact. The plane is often used to determine if a golfer is bringing his club up in the correct fashion (on plane) in contrast to bringing it too low (low plane) or too high (high plane).

In sentence: Jim was now focused on getting his swing back on plane after having mistakenly allowed it to flatten over the years, with considerable impact on the ball flight. 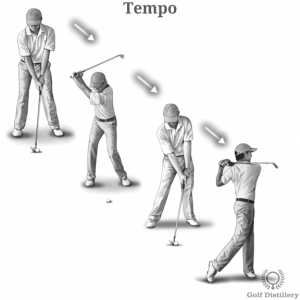 The tempo – or rhythm – refers to the rate at which the motions of a golf swing are executed. Often, golfers will enjoy practicing before a round and use that time to try and find a good tempo that they can take with them onto the course. A good tempo will be one where the sequence of actions that make up a golf swing are proceeding fluidly, where the different parts of the body are properly positioned as each milestone is reached.

In sentence: Jim struggled to find his rhythm today, noticing that he swung a lot faster than usual for no apparent reason. 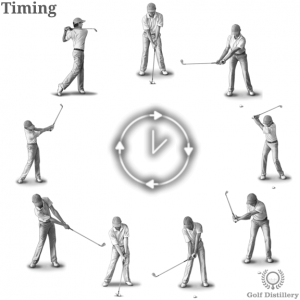 Timing refers to the cascading flow of motions and movements that together form a golf swing. Specifically when one action leads to another.

In sentence: It seems that Jim had lost his timing in his chipping game today; he couldn’t hold the hinge in his wrists as he came down for impact which resulted in a lot of thin shots.