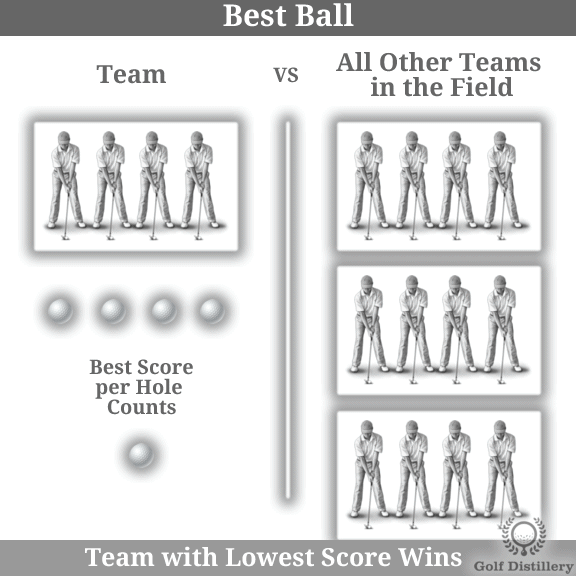 In a round of best ball golfers will be grouped as 2, 3 or 4-member teams and will compete together against the other teams in the field. Only one ball – and thus one score – counts per hole for each team and the team with the lowest total score for the round wins the tournament.

How to Play Best Ball

Each golfer hits his own ball throughout the round but after each hole, only the best score amongst the team members is recorded and counts as the score for the whole team for that hole.

Best Ball tournaments are often held in the NET variety where golfers’ handicaps are taken into account. In those, golfers are awarded one free stroke on as many holes as the number of their handicap. These strokes are to be used from the most difficult hole – hole rated 1 – and onward for as many holes as they have free strokes.

The best scores on each hole are added up to give the final, total score for the team. The team with the lowest score wins.

The best ball format is a great way to turn what is essentially an individual sport into something resembling more of a team sport.

Golfers can be bailed out during bad sequences by their teammates and they are encouraged to try to do well in order to support the team.

Also, by nullifying the effect of a terrible hole by one or more players, the format can help to speed up play.

In scramble tournaments, golfers hit their own ball but elect the best shot after each golfer in the group has hit. All other golfers from the group – except the one responsible for the best shot – will go pick up their ball and hit their next shot from the area where the best shot came to rest.

Similarly, golfers in a group form a team and only one score per hole counts. Again, as in best ball the group is playing against the rest of the field in a scramble tournament.