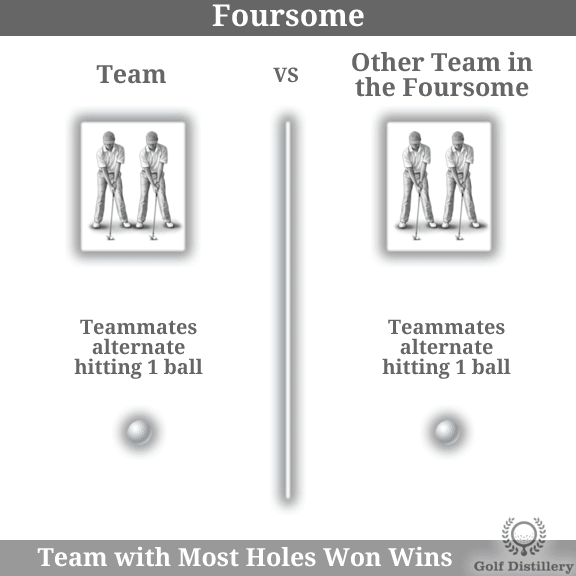 A match played in foursome golf (or alternate shot) will see 2 golfers forming a team that will compete against the team made up by the other 2 golfers in the group. Only one ball – and thus – one score will count per team on each hole and golfers on each team will alternate hitting the same ball, and alternate hitting from the teeing ground.

How to Play Foursome Golf

Only one golfer from each team will drive on the first hole. The other golfers will proceed to hitting their teammates’ ball from the spot where it came to rest.

The 2-member teams will alternate hitting the ball as such until their ball is holed out. On the second hole, the golfers who drove on number 1 will cede their spots on the tee box and will instead hit the ball where it will have landed.

After each hole, the best scores of both teams are compared and the team with the lowest score is said to have won the hole. The same thing occurs for every hole until the match ends.

How to Win Foursome Golf

Similarly to a four ball format (and other match play types), the team with the lowest score on each hole is said to have won the hole. A team is declared the winner when its lead is such that the opposing team can no longer close the gap mathematically.

Before the start of a match, teams will decide which member will drive on odd numbered holes and which will drive on even numbered holes. As soon as the first ball is hit on hole number 1, the alternation order for drives can no longer be changed and must be respected.

The foursome format is very prevalent in Scotland, to a much greater degree than it is in North America. Because only two balls are played on every hole (instead of 4), a round of golf is played at a much faster pace.

Another speed advantage comes from the fact that golfers hitting the second shot on a hole can already walk forward while their teammates are setting up for a shot on the teeing ground. Positioned forward they can then better help in locating balls that went astray and be ready to hit far sooner than they would have otherwise.