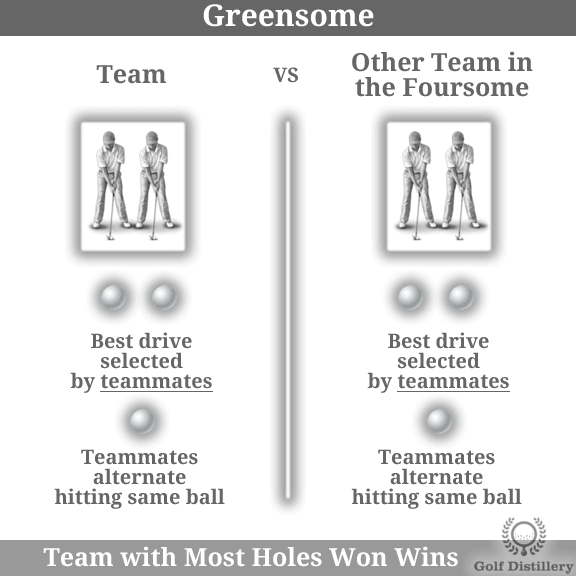 Similarly to the foursome format, a match played in greensomes will see two golfers forming a team where they alternate turns at playing the same ball and compete against the other team in the group. However, instead of only seeing 2 golfers hitting from any given tee box, all four golfers will hit from every tee box.

All four golfers will hit on the first tee box. Teammates will then elect which one of their two balls came to rest in the best location, which will be hit next. The golfer who has hit it there will let his teammate hit the second shot and they will alternate as such until their one ball is holed out.

After each hole, the best scores of both teams are compared and the team with the lowest score is said to have won the hole. The same thing occurs for every hole until the match ends.

A team is declared the winner when its lead is such that the opposing team can no longer close the gap mathematically. For example, a team that is trailing a match 3 holes, with 2 to play will be unable to win or tie even if winning the final two holes. The match will end as a result.

The greensomes format is more forgiving than its straight foursome format in that rather than playing the second shot from the one drive, wherever it has landed, the team has two chances of hitting a drive to a good location.

The format is especially helpful in negating the catastrophic effect of a drive hit out of bounds, for example, giving the team another and presumably better option from where to hit the second shot.