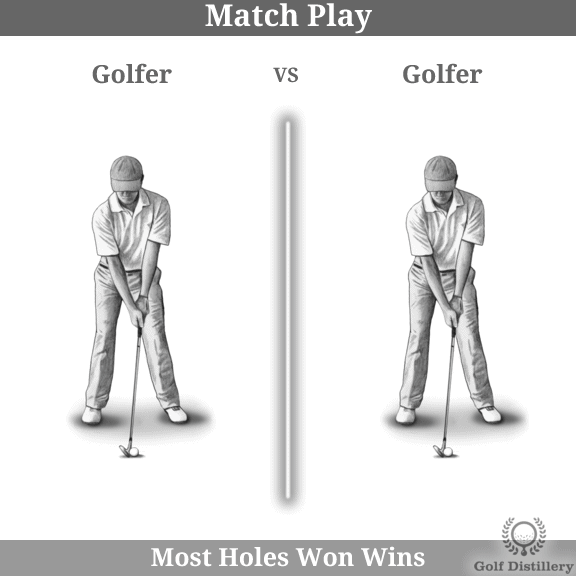 A round in match play golf will see two golfers competing head to head against each other and not against the rest of the field. Rather than trying to post the lowest score for the round golfers are here trying to win (or not lose) more holes than their opponent.

How to Play Match Play

Each golfer hits his own ball throughout the round and after each hole, scores of both golfers for the hole are compared. The golfer with the lowest score is said to have won that hole. If both scores are identical then no points (or holes won) are awarded for that hole.

How to Win in Match Play

Gross: When match play matches are played gross, handicaps are not considered and do not adjust the scores on any hole.

Net: When match play matches are played in the NET format, each golfer’s score is adjusted after each hole according to handicap and the net scores are compared to determine a winner for a hole.

How to Adjust Scores for Net Matches

At the start of the round, golfers declare their own handicaps and the difference between those is calculated. The golfer with the highest handicap will be awarded an extra stroke on as many holes as that calculated difference number.

For example, player A declares a handicap of 5 and player B declares a 10, for a difference of 5 (10 – 5 = 5). Player B will thus be given a free stroke on holes with difficulty ratings of 1 through 5. If player B were to need 5 strokes for the most difficult hole and player A to need 4 strokes on that same hole, the hole would be halved instead of seeing player B losing that hole thanks to his free stroke.

The match play format lends itself very well to season long ladder-type tournaments where winning one match will move the golfer onto the next round and so forth. The format also features more forgiving play where one golfer who is struggling on a particular hole can choose to pick his own ball up and give the hole to his opponent as a result. This feature combined with the fact that groups are made of only 2 golfers, match play matches are played much quicklier than a four-man group of medal play.

When teams of two are formed and compete head to head in match play it is called a four ball, or team match play.