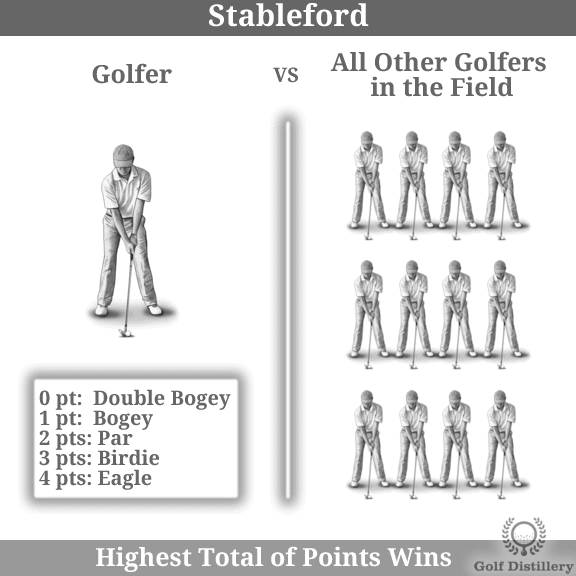 A round in stableford will see golfers competing against each other while trying to accumulate the most points during the round. Points are awarded for each hole and the number of points is directly related to the score posted – more points given to better scores – according to the table below (golf scoring terms):

Consequently, golfers will post final scores in points rather than in shots taken, e.g., 22 points instead of let’s say a 3-over round of 75.

How to Play Stableford

Each golfer hits his own ball throughout the round. After each hole he converts his score to points according to the point system outlined above. After the round, the golfer will tally his points for each hole which will give him his total score.

How to Win in Stableford

The golfer who has accumulated the most points wins.

One of the main appeals of organizing stableford tournaments is that it allows for participants to continue competing despite bad holes as the format doesn’t fully penalize catastrophic holes played. For example, in medal play, a player that posts a quadruple bogey (+4) on a hole sees his chances of winning vastly diminished whereas in stableford he gets penalized no worse than posting a double bogey and simply getting 0 points for that hole. He can then proceed to the next hole and not carry the full consequence of that bad hole on his final score.