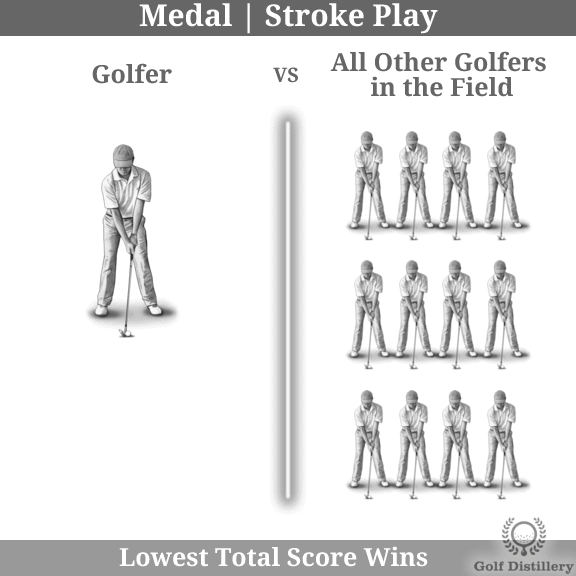 A round played in stroke play – or medal play – will see an individual golfer recording each of his shot in an attempt to finish the round using the lowest number of strokes. Stroke play is the traditional way of playing golf in most people’s minds as it is the one most often seen on television, notably in tournaments held by the PGA Tour and its international equivalents.

In a stroke play round each golfer records every one of his strokes (and penalty strokes if any) on every hole. In a serious medal play tournament golfers are not to accept nor offer gimmies and must instead sink every one of their putts, however long that takes. A tournament that uses this format can be held over a single day or over several, such as the 4-day schedule seen in most PGA Tour tournaments.

Gross: The golfer who has posted the lowest round wins, or the lowest total for multi-day tournaments.

Net: The golfer who has posted the lowest round net of his handicap wins. To calculate a net score you simply deduct your handicap number from your gross (real) score.

Medal play constitutes the best format for golfers to compare their entire skill set with that of their peers on a given day on a given course. This undoubtedly explains why the PGA Tour uses it most often to award its cash purses. Compared to other golf play formats, medal is often considered the most intimidating as every shot counts, notably the very bad ones. Contrary to team play formats such as best ball, there are no other teammate that can bail you out, and contrary to stableford, the effect of a quadruple bogey will not be soften in any way.

The four golf majors, i.e., The Masters, The US Open, The Open, and the PGA Championship are all competed using the stroke play format.