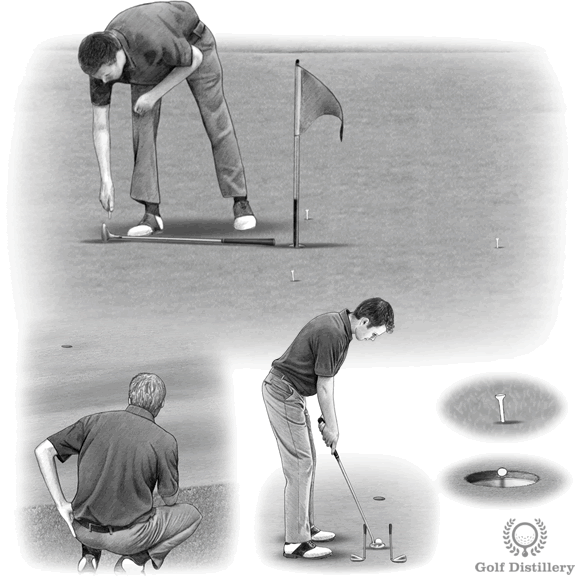 No matter how good you are at golf you will likely putt upwards of thirty times per round. Certainly, scratch golfers will finish their rounds with fewer putts than bogey golfers but putting still accounts for a most significant part of the game. As such, putting should be a prime focus of attention for every golfer as improvements there can directly lead to lower scorecards.

In this page you’ll find information on the following putting drills:

Improve your putting from a range of distances and breaks

This drill will help you practice putting from three key distances while at the same time training you to hit putts from all sorts of breaks (left-to-right, right-to-left, downhill, uphill).

Follow these steps in order to perform this putting drill:

This drill trains you to try and make putts from the ‘money’ range, i.e., from a distance where it can make a real difference to your scorecard or match.

Certainly, your one putter-length putts will be easier to make than those from three putter-lengths but practicing them all will train you to go for it whenever you are within that distance to the hole.

Additionally, while the shorter putts can be given to you from time to time in casual games it is crucial that you practice hitting them for the situations or matches where they will not.

The drill is also beneficial in that you will practice hitting from all around the hole and not just from one line. Indeed, putting from a flat surface is fine for improving your putting stroke and putting distance control but less so for hitting putts that break left or right, or are slightly downhill or uphill.

This drill will make sure that you become as comfortable hitting putts that go left-to-right than with those that go right-to-left.

Straight Back and Through Putting Stroke Drill

Every putting stroke – especially for longer putts – feature at least a little bit of a natural arc. What this means is that the clubhead of the putter doesn’t move in a perfectly straight line going back and through the ball. Rather, the clubhead will move a little inside both in the putt’s backswing and in its follow through. This is normal because your hands are attached to your body with one arm on each side.

There are instances however where you might want to favor a straighter putting stroke. Follow the instructions below in order to get rid of the arc in your putting stroke if it is proving problematic.

A straight back and through putting stroke can be more reliable and consistent than one that features a lot of arc.

Indeed, a putter head that is kept straight and square going back has better odds of being square at the impact position. This is in contrast to an arc-y putting stroke where the putter head is in an open position in the backswing. Bringing that open clubface back to square requires an additional level of precision.

Instead, mistiming issues can result in an open or a closed clubhead and ultimately in pushed or pulled putts.

A straight putting stroke can be especially crucial and work best for smaller putts. Indeed, smaller putts require the fewest distance travelled by the putter. As such, the natural arc is less of a factor and it should be easiest to hit a straight back and through putt with these shorter putts.

Target the Very Center of the Cup Drill

Take dead aim… at the very center of the hole

Harvey Penick used to say that golfers should take dead aim. While he may have been talking about golf shots using longer clubs and full swings that saying can certainly also apply to putting.

Indeed, rather than aiming at the general direction of the hole it can be quite useful to aim at the very center of the hole. That way, missing that very precise target can still result in holed putts.

Follow these steps in order to make a precise target in the middle of the hole:

If you want to make sure not to damage the inside of the cup as prescribed or if there is a hard plastic liner preventing you from doing so there is an easy alternative.

Indeed, practice your putting as you normally would on the putting green but instead of aiming at the holes simply aim at a tee (or tees) that you previously inserted into the ground. Imagine that you must hit the tee in order for the putt to count as made. Any putt that missed the tee can be deemed not to fall in.

The Smaller the Target the Greater the Margin of Error

Performing this putting drill will train you to focus and aim at a very specific target.

This is in contrast to aiming at the general direction of the hole. Picking a smaller target will get you to really apply yourself to make sure you hit a great putt and that the line you picked was the correct one.

And best of all, when you take that focus onto the golf course and when you miss that small target your putts may still fall into the hole nonetheless.

2-Putt everything from anywhere on the green

The distance from the hole for your first putt is always determined by the quality of your approach.

Sure, you will sometimes be able to put your ball within 10 feet for a real chance at birdie. But more often than not you will be faced with putt distances where the odds are against you. Instead of going for it every time it may be best to take your medicine and protect your par from a three-putt bogey rather than going for the one-putt birdie.

This putting drill will train you to focus on the pace of your putts over the direction or line of the putt. This is especially important for longer putts because a putt hit with the correct pace will still find its way into this three foot radius around the hole.

Sure, sometimes the ball will come to rest on the left of the hole, sometimes on the right but in every instance your ball will be within a safe distance to the hole for your second putt.

When you are far away from the hole, play the odds and focus on hitting it close instead of trying to hole it. Protecting against three-putts will do wonders for your scorecard and your morale.

They say 99% of putts that don’t reach the hole won’t fall in it, give or take 1%. So if you are tired of seeing your putts failing to reach the distance to the hole try this drill. You’ll learn to train yourself never to leave your putts short, giving you at least a chance that it will go in some of the times.

Give Yourself a Chance to Make It

The goal of this putting drill is to train you to always give yourself a chance at holing a putt. Few things are as frustrating as seeing your ball tracking nicely towards the hole only to see it stop a few paces before reaching it. The line of your putt is only one part of the putting recipe; the pace of the putt also matters.

Never leave your putts short with this drill. 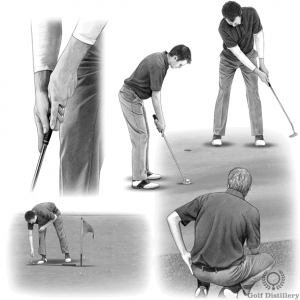