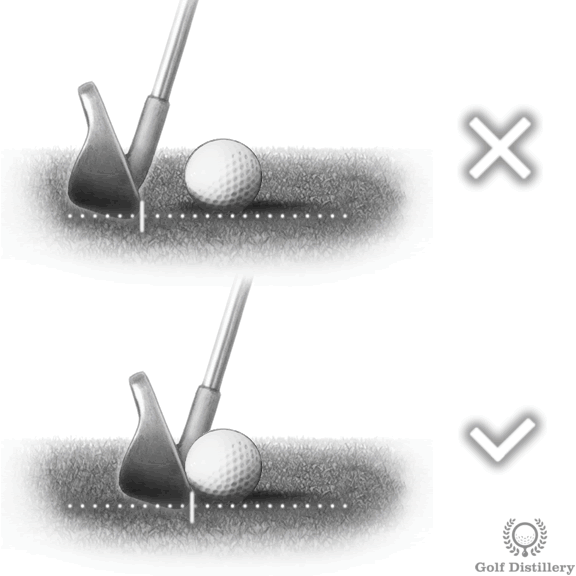 The main consequence of hitting it fat will be seen through a notable reduction in the distance travelled by the ball. This is caused by the fact the clubhead will be slowed down significantly by the ground as it travels towards the ball.

Read on to learn more about the root causes that produce fat shots and for tips on how to stop “hitting them fat”.

Bottom of Swing Arc Before the Ball and/or Too Low 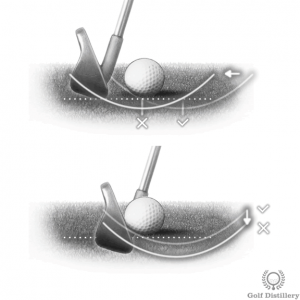 The fundamental causes behind fat shots relate to the arc of the swing itself and more specifically to the position of the bottom of the swing arc.

Indeed, in order to produce a shot that sees the club penetrating the ground before contact is made with the ball – such as the case with fat shots – the bottom of the swing arc needs to be located behind the ball. This is in contrast to where it should be, which is slightly in front of the ball in relation to the target.

In addition to the horizontal position of the bottom of the swing arc, fat shots can also be caused by its vertical position as well. Yes, a club that hits the ball first but then proceeds to dig down into the ground too deeply will suffer in terms of velocity which will ultimately impact how far and high the ball can go. As in the case where the club penetrates the ground first instead of the ball, a club that digs too far down into the ground will produce a shot that will feel fat to the golfer.

The following section highlights key swing errors that can lead to fat shots. The section following that one goes through the possible setup and address position mistakes that can also lead to to this shot error. Included in both sections are the corresponding fixes to “hitting it fat”.

Swing Errors that can lead to Fat Shots 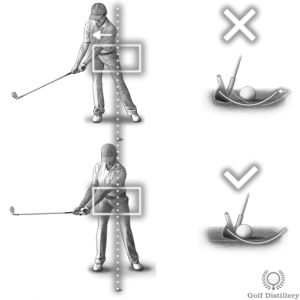 Swaying is the swing error that sees the hips move back and forward laterally during the course of the golf swing. This is in contrast to a better swing that sees the upper body rotating on top of the hips while remain mostly in place laterally.

FIX: Rotate your upper body on top of your hips without moving your hips laterally

Doing so will reduce the number of possible positions the bottom of the swing arc can be found and should allow you to produce purer shots on a more consistent basis.

Are you failing to maintain your spine angle?

The way – angle – the upper body is bent forward at address is to be kept mostly the same throughout the golf swing. Or at least until the follow through where the golfer is to rise up and finish the swing while standing over his left foot.

FIX: Keep your forward spine angle constant until impact is made with the ball

If you are seeing fat shots creeping into your game make sure that your spine angle is the same at impact as it was at address. And ideally, try to keep it the same all the way from address to impact.

Address & Setup Position Errors that can lead to Fat Shots

Is the ball located too much forward? 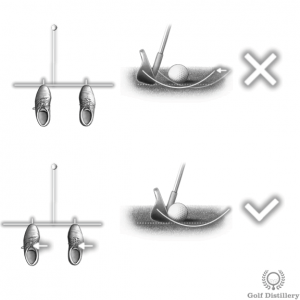 One of the reasons your club may penetrate the ground before it hits the ball has to do with the placement of the ball itself in your stance, in relation to your feet.

The general guideline for swings at full speed is to place the ball in the center of your stance for wedges and short irons and to incrementally move your feet back in order to find the ball forward as the length of the clubs increase.

Is your stance too wide? 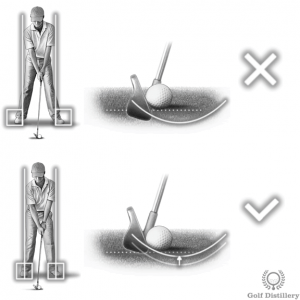 Another possible explanation to fat shot relates to how far your feet are positioned relative to each other.

As the stance widens the distance between the ground and your hands shortens but the length of your clubs does not. While the change may be minuscule it can prove enough for the bottom of the swing arc to dig just too deeply into the ground.

This is particularly important when hitting from fairway bunkers, where a fat shot will result in a considerable loss of distance.

FIX: Narrow your stance a little

Simply make sure that your stance is not wider than it should be for the shot at hand and favour a normal stance that sees the outside of your shoulders lining up with the center of your feet.

Is your weight mostly on your back foot? 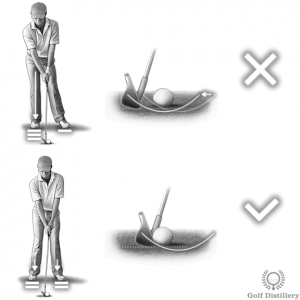 At address and for normal shots you will want your weight to be distributed equally among your two feet.

If for some reason your weight resides on your back foot more than it does on your front then it could cause your club to dig behind the ball and produce a fat shot.

FIX: Distribute your weight equally among your two feet at address

More on: Adjusting the weight distribution across your feet in golf

Are you leaning your shaft forward too much? 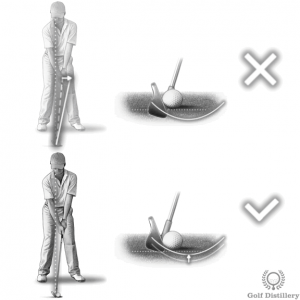 It is normally a good idea to lean your shaft forward a little at address for most shots that require a full swing.

However, there is such a thing as overdoing it and doing so runs the risk of producing fat shots. Leaning your shaft forward at address is a good way to promote hitting down on the ball.

Leaning your shaft forward too much will result in your club penetrating the ground at an angle of attack that will be too steep.

Overdoing it will negate any benefit associated with a good shaft lean.

Are you holding your club too high on the grip? 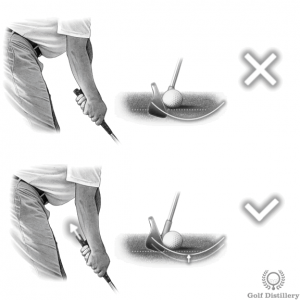 Another reason for why your club could penetrate the ground too deeply has to do with the placement of your hands on the grip.

Similarly, it is generally a good idea to choke down on the club when hitting shots from fairway bunkers. Doing so will help shield you from seeing the club travel below the ball, where it will dig further and hit the ball above the sweet spot.

FIX: Grip down on the club a little

While the advice above is true for shots under particular lies, some issues with fat shots can be ‘solved’ by simply gripping lower on the club.

This is especially true if you are shorter than the norm and your clubs haven’t been custom fitted to your height.

More on: When to grip up or down on the shaft

Are your feet dug too deep into the sand? 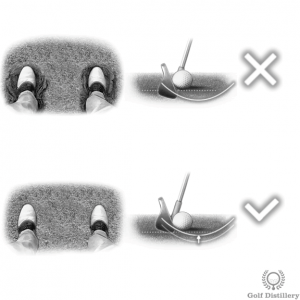 Hitting fat shots from fairway bunkers are commonplace and can be explained by how deep your feet are dug in at address. Indeed, a sandy lie brings with it another variable in how deep your feet dig into the ground, in relation to the ball.

If the ball sits up in an otherwise nice lie inside a bunker but you dig your feet deep into the sand in order to gain better stability the secondary effect of that is that you are lowering the bottom of the swing arc.

FIX: Don’t dig into the sand with your feet too much

The point here is to promote a bottom of the swing arc that matches where the ball is located vertically.

Are your knees too bent? 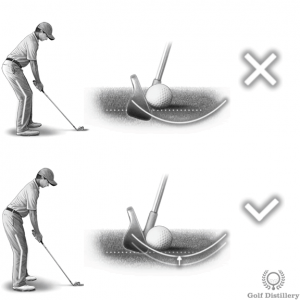 At address your knees should be bent a little which should allow you to adopt a somewhat athletic position ahead of the golf swing. This can be overdone though and bending your knees too much will create consistency problems as it will be hard to maintain the same amount of bend throughout the swing.

FIX: Make sure your knees are bent just enough at address

A moderate amount of knee bend is all that is required for a golf swing. This bend angle should be kept constant throughout most of the swing.

Overdoing it will invite consistency problems in getting the club to hit the ball cleanly.

More on: How much knee flex should you have at address?

Is your upper body bent forward too much? 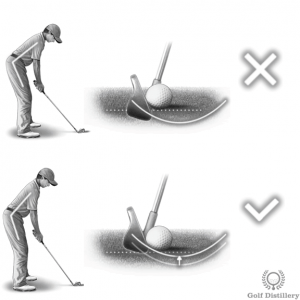 At address your upper body should be tilted forward in order to make room for your hands to be able to move freely during the golf swing. How much your upper body bends forward can also be overdone, as it can for the bend in your knees as was just previously covered.

Bending your upper body too far may lead to fat shot because it reduces the distance between your hands and the ground.

FIX: Stand taller at address by reducing the forward bend in your spine slightly

More on: How to set the right spine angle

Are your shoulders sloping too steeply?

Finally, there is another reason for fat shots that relate to the address position and it concerns the way your shoulders are sloped.

Because your right hand is lower on the grip of the club than the left hand it is normal for your right shoulder to be somewhat lower than the left. The slope formed between the two shoulders however should be slight and you should fight the tendency to overdo it as this posture error can lead to fat shots also.

FIX: Make sure the slope of your shoulders matches the slope in your hands

Doing so should help in making sure the slope of your shoulders are not to blame for your fat shot issues.