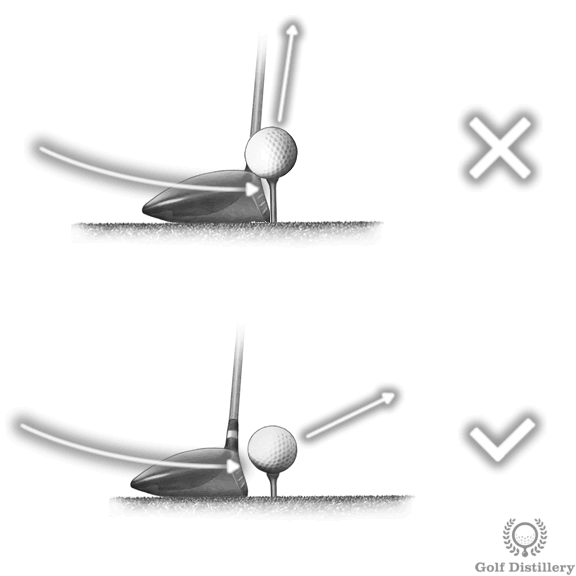 In golf a sky shot occurs when the clubhead hits the ball near its bottom pole which sends the ball high into the air but not much forward.

In contrast to a better shot that sees the clubface striking the ball through its sweetspot, skying a ball will come as a result of the top edge of the club – or even the crown of woods – making contact with the ball. This results in a ball that shoots straight up but in one that doesn’t travel forward much at all.

Continue reading to learn more about the root causes that produce skyed shots and in order to review fixes that will help you to stop skying shots.

Bottom of the Swing Arc Too Low 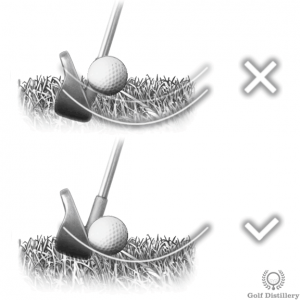 While there are many specific scenarios that can explain why a shot was skyed, all share a common root cause.

Yes, in all instances the bottom of the swing arc will be too low relative to the position of the ball. Quite simply, the club can’t hit the ball with its top edge and produce a sky shot otherwise.

The following scenarios can explain why a sky shot occurred and may help you pinpoint the specific cause.

Was the ball too high on the tee? 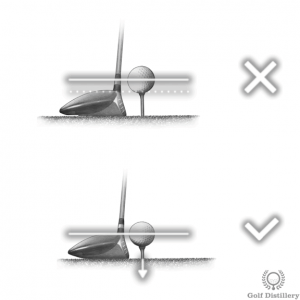 Sky shots occur most often from the teeing ground, while the ball sits on top of a tee.

Therefore, the first place to look at is the height of the tee itself. It is more than likely that sky shots produced from the teeing ground came as a result of a ball that was sitting too high on a tee.

FIX: Push the tee further down into the ground

A common rule of thumb is to position the ball on a tee in a way that sees the top edge of the clubface square off against the middle of the ball. Therefore, a higher tee is required for shots using a driver but the tee should be planted deeper into the ground whenever using fairway woods.

A competing guideline states that the very bottom of the ball should square off against the top edge of the driver. If you are using this rule of thumb and are encountering many skyed shots it may be best to lower the tee or to pay closer attention in making sure that the ball doesn’t sit above the top line of the clubface.

More on: How tee height impacts your golf shots

Was the ball sitting up in the rough? 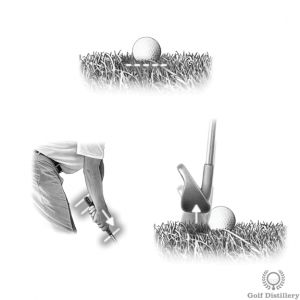 Outside of the teeing ground sky shots also occur frequently in the rough, especially when the conditions allow for fluffy lie conditions.

Certainly, those conditions allow for the club to travel underneath the ball and produce sky shots. While the golfer may not realize it a golf sitting high in a fluffy lie will be quite higher than it would be if it were found in the middle of the fairway.

Adjustments are therefore needed to make sure the club hits the ball cleanly.

FIX: Choke down on the club or hover over the ball at address

It may be a good idea to shorten the length of the club whenever the ball is sitting up in the rough. This can easily be achieved through gripping down on the club slightly. Doing so will raise the bottom of the swing arc and will promote a cleaner hit at the ball.

Otherwise, it may be a good idea to hover the club above the ball at address instead of setting the club down behind the ball it as you normally would. Jack Nicklaus was particularly fond of hovering the club, which among other things helped keep fat contacts with the ball at bay.

Skying the ball when it is sitting up in the rough is akin to hitting a shot fat.

Related Tweak: When to grip down on your club

While the previous scenarios looked at several ball and lie situations that could lead so sky shots the following concern specific swing errors that can lead to the same golf shot error.

Are you hitting down with your driver and fairway wood, instead of hitting up? 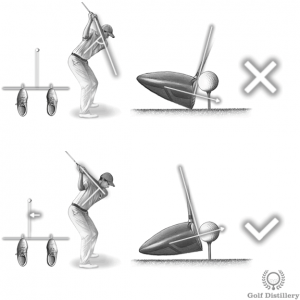 “Hitting down on the ball” is something to strive for whenever hitting the ball using irons. But whenever using a driver or a fairway wood, you will want to “hit up on the ball” instead.

Hitting down on the ball using a driver or fairway wood can indeed lead to sky shots, especially when the ball is sitting on a tee.

FIX: Move the ball forward a little and/or use a flatter swing

Your hitting down on the ball – and sky shot issues – may be caused by a simple ball positioning issue.

Indeed, make sure that the ball is located in front of the instep of your left foot at address whenever using a wood. A ball found towards the middle of the stance instead will see the club catching the ball on a descending blow instead of after the bottom of the swing arc is reached, while the club is rising up.

Otherwise, if the ball is correctly positioned forward in your stance and you are still hitting down on the ball, your swing might be too steep. Using long clubs such as a driver or a fairway wood command that you use a flatter swing, in contrast to a very steep one.

Are you bending your upper body forward and down during the downswing? 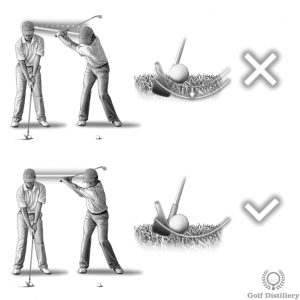 In connection to the ball sitting up in the rough situation presented above, failing to keep your upper body angle constant throughout the swing can lead to sky shots.

If you have the bad habit of bending your upper body forward and down during the downswing as you head into impact, you are increasing the likelihood of skying your shots when the ball is sitting up in the rough.

Instead of producing a fat shot, the clubhead will proceed to travel underneath the ball and will catch it on the top line or the crown of the club.

Paying close attention to the way your upper body rotates around your hips and not allowing the angle to move should bring the club back to the ball at impact, and should help shield you from skying shot issues.

More on: Failing to maintain your spine angle – swing error