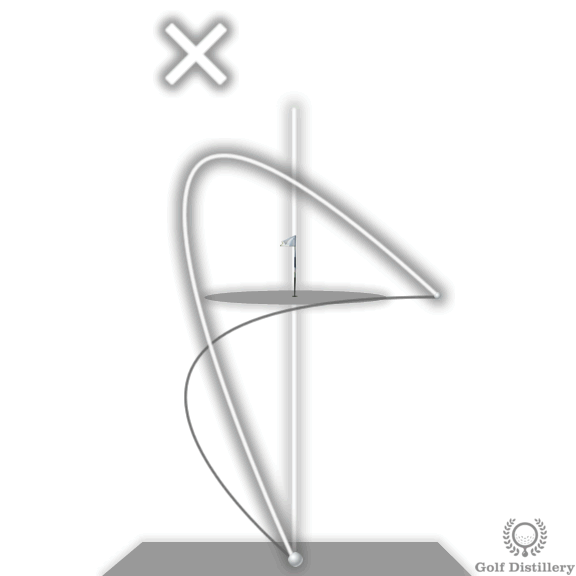 In golf a slice – or a sliced shot – is one that sees the ball beginning its flight left of the target initially but then curving aggressively to the right as a result of strong clockwise sidespin. Because it misses the target it is considered a golf shot error that should be avoided. Note that technically, a slice can also be referred to as a pull slice since similarly to that shot, the ball will start left of the target.

Continue reading in order to find out what causes slices and for advice on how to stop slicing shots. Information regarding the push slice variety is also provided. In contrast to a slice proper, a push slice begins its flight right of the target and spins further right still.

Clubface Closed at Impact, But Open to the Club Path 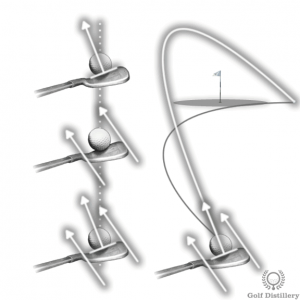 In order for a shot to feature considerable side spin the clubface must hit the ball with an angle that doesn’t match that of the club path. Or in other words, the clubface will not be perpendicular to the direction of the club at impact if the ball is to spin sideways.

In addition to this, because the ball starts its flight left of the target initially it means that the club was closed relative to the target, meaning that is was aiming to the left of it.

And finally, the only way the club can be aiming to the left of the target at impact yet be open relative to the path is through a severe outside-in club path.

To sum it all up, a slice is caused by the combination of a:

When these factors are all present it will produce a shot that sees the ball start left of the target that will spin aggressively to the right.

SLICE FIX #1: Your Stance is Open – Move to a Square Stance 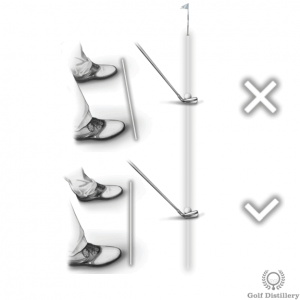 A slice is strongly associated with an open stance. Indeed, it is very likely that your feet are aligned to the left of the target at address whenever producing slices.

In most cases, golfers who slice will aim to the left of the target in order to leave enough room for the ball to spin right and come to rest in the fairway. Such a stance can alone be responsible for the outside-in club path that is associated with the slice.

Instead of positioning your feet in a way that they point to the left of the target, simply bring in your left foot until the line it forms with the right foot is parallel to the target line. This parallel setup is known as a square stance and it is a prerequisite in solving your slice issues.

SLICE FIX #2: Your Grip is Too Weak – Move to a Stronger Grip 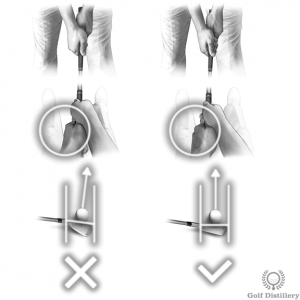 The solution above dealt with the club path itself. But as was explained previously, a slice is the result of a specific combination of both the club path and the clubface angle at impact.

So the next step in fixing your slice involves looking at the clubface, and trying to determine why that face is open to the path.

Moving to a stronger grip can be done easily.

If you were only seeing one knuckle on your left hand at address – a feature of a weak grip – simply rotate both hands around the grip of the club until you see two knuckles instead, for a neutral grip. And if you were already using a neutral grip then you’ll want to try with a stronger grip still where you rotate your hands around the club until you see three knuckles on your left hand.

Moving to a stronger grip will help square the clubface at impact, instead of leaving it open. 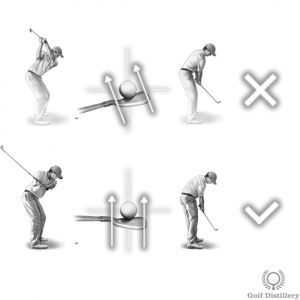 Now that we have eliminated the possibility of an outside-in club path being caused by an incorrect stance at address we can move on to the actual swing path itself.

An outside-in club path, just like the name implies, sees the clubhead heading into impact from across the target line, or outside of it. It will cross that line at impact and the club will then move inside as the club is rotated around the golfer’s body.

In any case, the club should be taken back square during the takeaway, meaning that the butt end of the shaft should point straight forward when the shaft of the club is parallel to the ground. This is in contrast to a club that points way left of the target, which is a feature of an outside takeaway.

More on: How to position the club during the takeaway

Other Possible Reasons for an Open Clubface

Are you bringing the club back with an open clubface during the takeaway?

Your open clubface issues might also be caused early in your swing through the position of the club before it reaches the top of the swing. Indeed, an open clubface takeaway features the leading edge of the club pointing towards the sky a little when the shaft is parallel to the ground.

FIX: Use a square clubface takeaway instead

This will help keep the club squar-er to the path throughout the swing.

Are your wrists cupped at the top of the swing? 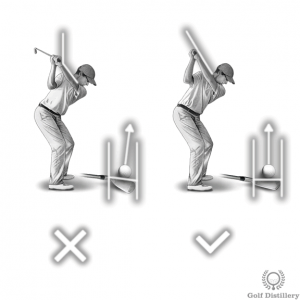 During the backswing portion of your swing you wrists will naturally hinge and cock up until you reach the top of the swing. At that position, you’ll need to make sure your wrists are not positioned in a way that they promote an open clubface at impact.

Such an undesirable position will see your left wrist angled up in what is referred to a cupped position.

You are better off avoiding this wrist position if you are having slicing issues because the unwinding process from that position tends to leave the clubface open at impact. Instead, you will want to see that left hand flat instead of bent up at the wrist.

FIX: Keep your left wrist flat at the top

Is your club “across the line” at the top of the swing? 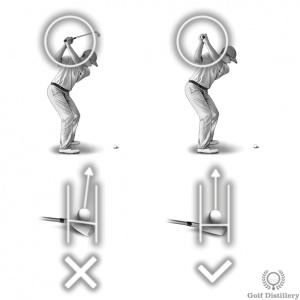 The position of the club at the top of the swing can also vary in how the shaft is aligned in contrast to the target.

Indeed, a club that is said to be ‘across the line’ is one where the shaft is pointing to the right of the target. This is in contrast to a club in a ‘laid-off’ position that sees the shaft pointing left of the target.

An ‘across the line’ club can lead to an open clubface at impact, resulting in cutting across the ball and sending it slicing right.

FIX: Point the shaft of the club at the target at the top of the swing

This will help promote good timing in getting the club square at impact instead of open.

More on: Where to point the shaft at the top of the swing

At the follow through, is the clubface facing the sky? 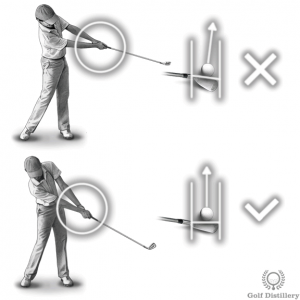 Another clue into what is causing your slices in general and your open clubface specifically has to do with the way the clubface is positioned early in the follow through, at the release.

Indeed, the golfer’s position at the follow through can be indicative of issues leading up to impact with the ball.

This will help square the clubface naturally at impact, instead of leaving it open.

Are you holding on to the club too tightly (too much grip pressure)? 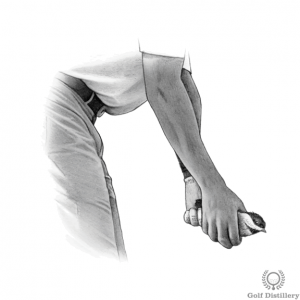 Another factor that may explain why your clubface is not allowed to get square to the target at impact is related to the grip pressure itself.

Indeed, whenever getting nervous for a specific shot, or nervous because of the state of scoring game itself, golfers tend to grip their clubs with more force than they should. This added tension in the hands restricts the release of the club, which never gets to square and instead heads into impact into an open position.

FIX: Hold the club as you would a live bird, or an open tube of toothpaste

This will help your wrists release naturally and allow the club to get into a square position.

More on: Don’t grip the club too tightly

Other Possible Reasons for an Outside-In Club Path

Are you coming over the top? 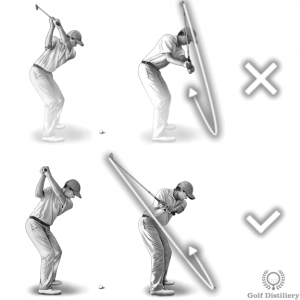 A likely reason for hitting balls with an outside-in club path may be that you are coming over the top. Indeed, in this swing error the hands are pushed or are otherwise located away from the body when beginning the downswing. In doing so, the hands bring the clubhead outside of the target line as it heads into impact with the ball.

If you suspect you are indeed coming over the top then you will need to pay careful attention to your downswing and to the way your hands behave as they leave the top of the swing.

Rather than flipping the clubhead out and away from your body you should strive to see your hands rotate around your body, bringing along with them the club on a preferable inside-square-inside path.

More on: Coming over the top – swing error

Are you locking your left knee at impact? 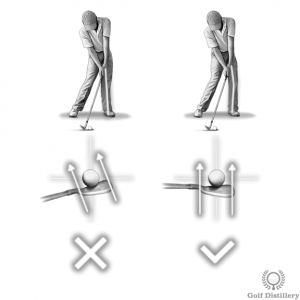 The way your left knee is positioned at impact can also help explain why your club can take an outside-in trajectory.

Indeed, locking your left leg or straightening it entirely ahead of impact moves your hips away from the mostly fixed central axis they should be. And it moves them in a way that pulls your left hip inside, contributing to an outside-in club path.

FIX: Keep the knee bend angle in your knees constant mostly during the entire swing

This should help you avoid moving your hips out of position.

Other Possible Reasons for a Slice

If the previous reasons still don’t entirely explain the core of your slicing shot issues then you’ll want to consider the following alternative explanations.

Are you hitting shots on the heel of your club? 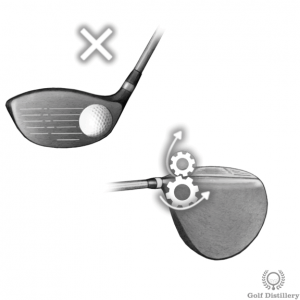 It is also possible that you are not hitting the ball on the sweet spot of you clubface whenever you are hitting balls that slice right. Indeed, you should probably check to make sure you are not hitting golf balls on the heel portion of your clubface.

This is best avoided otherwise the gear effect in golf is brought into the equation, which will transfer clockwise spin onto the ball.

FIX: Stand further from the ball

Doing so should help you hit balls nearer to the center of the clubhead and away from the heel of the clubface. 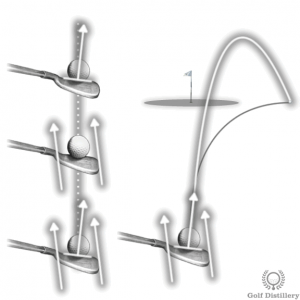 In golf a push slice is one that features the same left to right side spin that is found in a slice but with the notable difference that the shot starts right of the target instead of left.

The causes behind a push slice are the same as those that cause a slice, which are thoroughly explained above.

The only difference is found in the stance and clubface direction. Indeed, the stance is rotated clockwise until it is closed to the target and the clubface is aimed right of the target. But again, the left to right spin comes as a result of a clubface that is open relative to the club path.