In golf a thin shot – or a golf shot hit thin – is one that see the club hitting the ball below its equator. But in contrast to a better shot that sees the clubface striking the ball inside the sweet spot hitting it thin will often see the leading edge of the club making contact with the ball.

This results in a ball that doesn’t travel as high and a shot that doesn’t feel as good in the hands of the golfer that produced it. It also results in barely any divot being produced by the club. Although the distance the shot ultimately travels can be near its good shot equivalent it is not uncommon to see the ball travel past the target as the ball rolls more than it normally would have.

Continue reading to learn more about the root causes that produce thin shots and for fixes that will help you stop “thinning shots”. 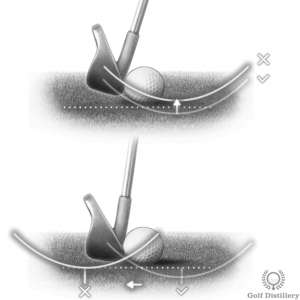 In a similar way to fat shots, thin shots are fundamentally produced by errors related to the arc of the swing itself and more specifically to the position of its bottom.

This can happen as a result of a swing path that doesn’t reach down far enough. Or in other words, it is possible that your thin shots come as a result of a club that simply doesn’t travel down enough to hit the ball on the sweet spot of the club and produce a healthy divot following the strike.

Swing Errors that can lead to Thin Shots

Are you standing up at impact? 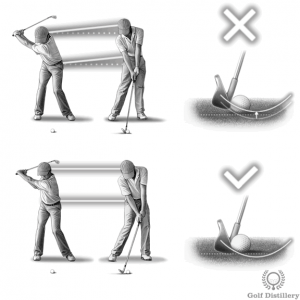 One of the reasons the bottom of your swing arc might be higher than where it should be may be related to the way your spine behaves at impact.

The angle you tilt your upper body forward at address should be more or less set in stone as you progress through the swing and rotate the club around your body through the movement in your hips, shoulders and hands.

A notable swing error sees the golfer rising just ahead of impact and in doing so raising the bottom of the swing arc just before contact is made with the ball.

FIX: Keep your head in the box

Trying to keep your head in the same vertical distance from the ground all the way through impact will keep your upper body from rising. 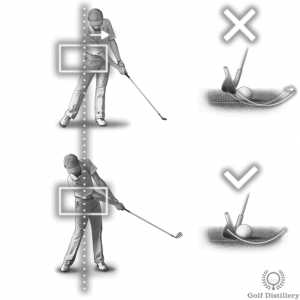 The position of the bottom of the swing arc may have moved from where it should be thanks to the swaying swing error.

Specifically, a golfer who is said to sway will move his hips laterally during the course of the swing, moving them back during the backswing before bringing them forward during the downswing. Doing so, in contrast to simply rotating your upper body above your hips will move the bottom of the arc around and will make hitting consistent shots more difficult.

FIX: Lean your right knee in at address

Doing so just prior to the takeaway will help lock the position of your hips laterally and should help keep you from swaying.

Do you reverse pivot? 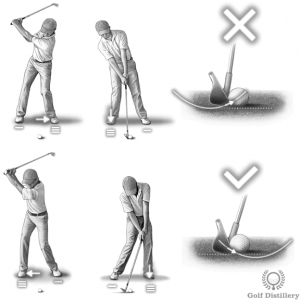 A golfer who is said to have a reverse pivot in his swing is one that will transfer his weight in the opposite way during the course of his swing.

FIX: Pivot to your back foot during the backswing

Doing so will help ensure you are not transferring weight onto your front foot instead, which should help get rid of a reverse pivot before it can start.

Are you flipping the club? 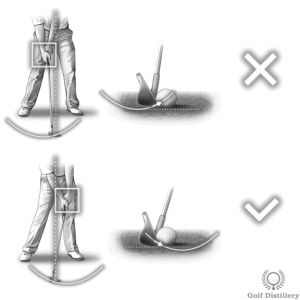 Flipping the club – or scooping the ball – involves losing the lag in the clubhead which is necessary in order to create the ideal conditions for hitting down on the ball.

Specifically, it involves letting the clubhead catch up to your hands at impact instead of seeing your hands ahead of the club and ball at impact. Doing so, while not a swing error per se, can result in one when it is not done purposefully.

Indeed, flipping the club will tend to move the bottom of the swing arc back behind the ball and will oftentimes see the club hitting the ball below the sweet spot of the clubface, or worse through the leading edge.

FIX: Keep the hinge in your wrists through impact

Doing so will help ensure you are setting the club to strike the ball with its clubface, while the club is traveling down.

Are you failing to maintain your spine angle constant? 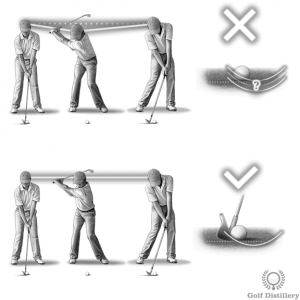 Finally, another reason that could explain your hitting shots thin again has to do with how your upper body moves during the course of the swing.

While a previous clue looked at how your spine behaved at impact – if it was rising – you also need to look at how your upper body moves during the entire course of the swing. An upper body that moves up and down throughout the swing renders the position of the bottom of the swing arc unreliable.

It therefore makes it very difficult to place it just in front of the ball, where it should be.

FIX: Imagine your head is pressed against a wall

More on: Failing to maintain your spine angle swing error

Address & Setup Position Errors that can lead to Thin Shots

Is the ball located too much forward? 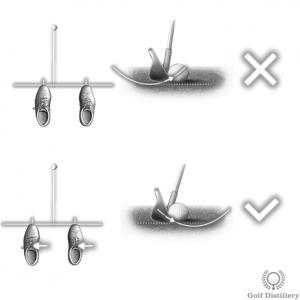 The reason your swing arc reaches its bottom before the ball and produces a thin shot may have nothing to do with the actual swing itself and may have to do with the positioning of the ball instead.

A ball that is placed too much forward in your stance – in contrast to where it would ideally be – will prove difficult to hit cleanly on the sweet spot of the clubface.

If you are using the ball forward positioning option and are struggling with thin shots, move to a positioning mechanism that sees the position of the ball vary according to the club in hand.

Is your stance too narrow? 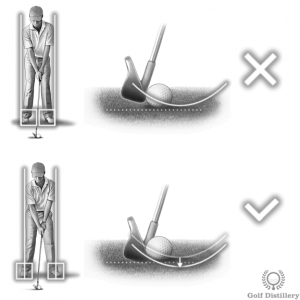 A stance that sees your feet too close to one another can also produce thin shots. This happens because the bottom of the swing arc will be slightly higher than it would be in a normal stance, and noticeably more than it would be if using a wide stance.

FIX: Widen your stance a little

If you suspect a very narrow stance could help explain your thin shots it may be a good idea to allow more room between your two feet at address.

Doing so should help lower the swing arc slightly and may prove enough to produce shots that see the club hitting the ball on its sweet spot.

Is your weight mostly on your back foot? 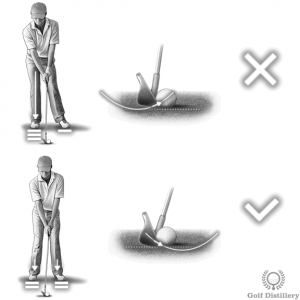 The way your weight is distributed among your two feet at address can also help explain why you are hitting some shots thin.

Placing your weight towards your back foot while setting up, in contrast to evenly distributing your weight among your two feet, can move the bottom of the swing arc back. This can lead to thin shots.

FIX: Distribute your weight equally among your feet at address

Doing so will help in setting the bottom of the swing arc in a consistent and predictable position.

More on: Impacts of weight distribution across your feet in golf

Do you lean your shaft back? 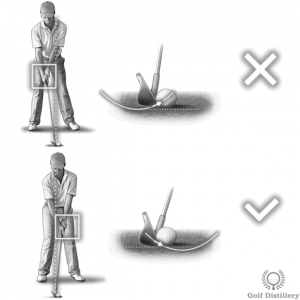 In relation to the flipping the club swing error mentioned previously, another reason your club might be hitting the ball while it is rising may have to do with how your hands were set up at address.

Flipping the club saw the clubhead catch up to the hands at impact, which can produce thin shots. But not leaning your shaft forward at all, and actually leaning your shaft back during at address can put you in a position where hitting down on the ball will be tricky and thin shots will be difficult to avoid.

Or at the very least, make sure your hands are not behind the clubhead at address whenever setting up for shots using irons and wedges.

More on: Impacts of shaft lean

Are you standing too tall in your knees? 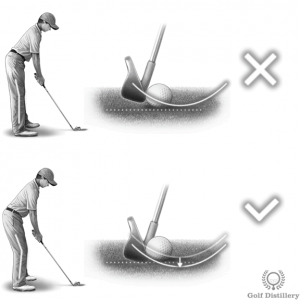 The degree to which your knees are bent at address can also set you up for thin shots at impact.

Normally and in a good setup position, you will want to adopt a somewhat athletic stance that sees your knees bent slightly, which makes it possible for an active swing to proceed in a stable position.

Not bending your knees enough – sometimes referred as standing tall – can raise the bottom of the swing arc just enough to make thin shots more likely.

Just make sure you are not overdoing it, which could instead set you up for fat shots.

More on: How much knee flex should you have at address?

Are you standing too tall in your spine angle? 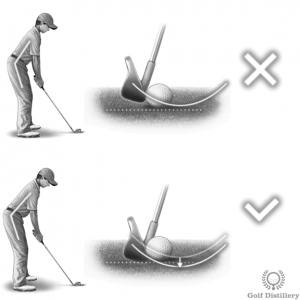 In relation to the point above regarding the way your knees are bent, another way you could be standing too tall and producing thin shots has to do with the spine angle. Not tilting your upper body forward and instead remaining in a mostly standing position may also rise the bottom of the swing arc and may help explain why your shots are hit thinly.

But make sure you are not overdoing it, which itself can lead to fat shots.

More on: Tilting your upper body forward for the right spine angle

Are your shoulders level to the ground? 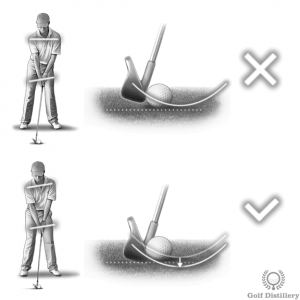 Finally, another check at your setup position may be needed in order to rid your game of thin shots.

In this case, you’ll want to look at how your shoulders are sloped, or in other words how they both line up in relation to the ground below. Because your right hand is positioned lower on the grip of the club than your left hand, it is natural for your right shoulder to find itself slightly lower than the right.

Some golfers fight this natural stance and position their shoulders level to the ground instead. Doing so can produce thin shots.