Tips on How to Hit from Any Bunker

This section offers tips on how to hit golf shots from sand bunkers. Indeed, while all bunker shot tips offered here deal with situations where the ball sits on top of sand the various lies call for tweaks to your setup and swing in order to be successful. The bunker shots covered are: 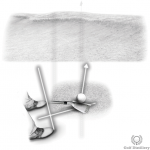 The basics to the typical bunker shots are covered and a lot of the tips will apply to the other types of bunker shots that are featured in this section. 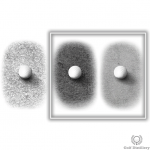 A bunker with wet or otherwise compact sand calls for a different shot and execution than one with dry and fluffy sand.

Review our wet sand tips in order to protect yourself from seeing the club bounce from the hard surface and shoot your ball clean over the green. 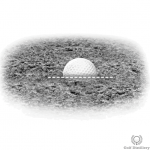 When your golf ball lands into a firm bunker and digs in rather than bounce off you are looking at a plugged bunker shot.

Review our plugged bunker tips in order to successfully dislodge the ball from its tricky location. 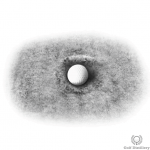 When your golf ball lands into a fluffy bunker and stays inside the crater that was created at impact you will be faced with a fried-egg bunker shot.

You need to make some adjustments to your swing and setup in order to avoid hitting the ball thin or leaving the ball in the bunker. 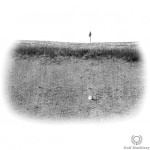 When your golf ball lands or rolls up the side of the bunker closest to the green you will be faced with an upslope bunker shot.

You’ll need to make modifications to avoid seeing your club dig into the sand behind the ball and getting stuck there, along with the ball.

When your golf ball comes to rest up the side of the bunker farthest away from the green you will be faced with a downslope bunker shot.

You’ll need to tweak your setup and swing in order to avoid skulling the ball thin and sending it over the green, or straight into the lip of the bunker. 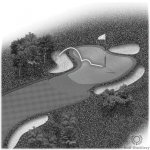 When your golf ball comes to rest in a greenside bunker that is located far away from the flag and hole you will be faced with a long bunker shot.

Review our long bunker shot tips in order to send the ball up onto the green and rolling towards the hole.

When your golf ball comes to rest in a bunker closest to the flag with little green to work with you will need to execute a short bunker shot.

Follow our short bunker tips to see the ball fly a short distance and land softly onto the green. 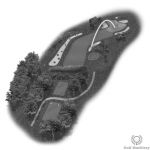 Sand bunkers are not confined to the area next to the green.

They can be found alongside – or within – fairways and shots from them require tweaks to your setup and swing as well. Indeed, the advice for greenside bunkers presented above do not apply to shots from fairway bunkers as the increased distance to the green changes the situation fundamentally.