Here are the golf terms that represent the types of lies that golfers will face, fully explained and illustrated. 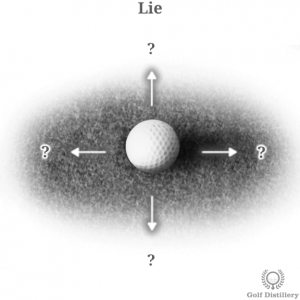 A lie refers to the position of a ball as it relates to its and its golfer’s environments.

Use in a sentence: After John hit his drive into a tree he walked nervously towards his ball in order to find out what kind of lie he’d have to work with on his next shot.

A lie can also refer to a part of the club.

Furthermore it can also refer to the number of strokes a golfer has hit in order for the ball to reach its present location.

Factors that Will Impact a Lie

Surface Below the Ball 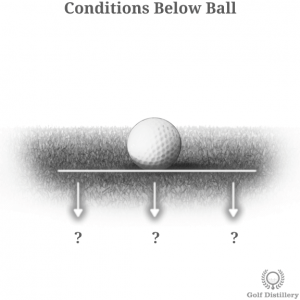 A key factor in assessing the lie for a shot is to consider the type of surface that is located underneath the ball.

For example, a golfer will play a shot differently when the ball is lying on sand than he would if the ball were to be located on closely mown grass on the fairway.

Also, a golfer might be pleased to see his ball come to rest in the middle of the fairway but less so if he finds it has come to rest inside a divot.

Obstructions Between Ball and Target 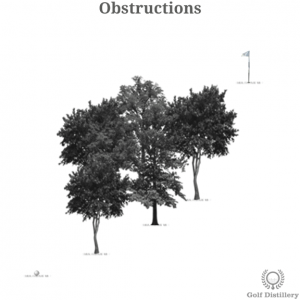 Another factor to consider is whether the line to the target is obstructed in any way.

A golfer facing good conditions around the ball may feel disheartened if he finds out a large tree is blocking the desired path of the ball towards the target.

Hindrance to the Swing 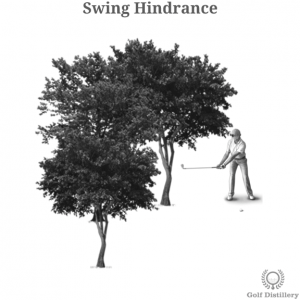 For a lie to be considered good a golfer needs to be able to freely swing at the ball without any restriction in movement.

Level of the Ball in Relation to the Feet 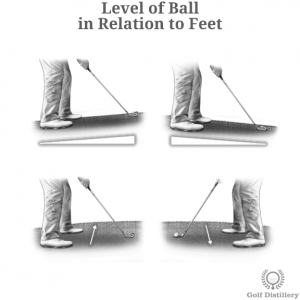 Ideally, a ball will rest on a completely even and flat surface, such as that normally found on a teeing ground. And ideally still, the golfer’s feet will also be on the same flat surface, ensuring that the ball and feet are all on the same level.

As soon as one or more of the three previous components is on a different level than the others the shot will become trickier to execute.

Rules Affecting the Addressing of the Ball 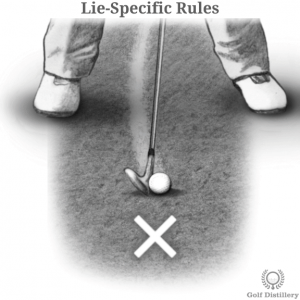 The rules of golf will also impact the lie of a ball. For example, when a ball comes to rest in a bunker a golfer is not allowed to ground the club at address as he would normally otherwise. The same goes whenever a ball comes to rest in a water hazard in that the golfer can’t put the head of the club next to the ball at address, adding difficulties to the ball striking. 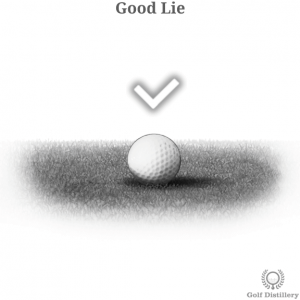 A golfer will face a good lie when his ball is situated in a way that does not add difficulty to a golf shot. For example, a ball that lands on the fairway will often have a good lie, the shorter grass making it easy to hit the ball.

Use in sentence: John was pleased to find that his ball came to rest in a good lie after it hit a tree. 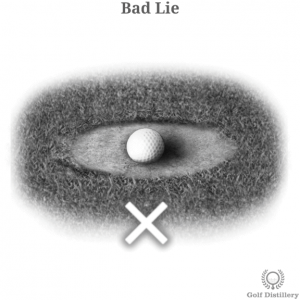 A golfer faced with a bad lie is one whose ball is situated in such a way as to add difficulty to a golf shot. For examples, a ball will be in a bad lie if it is buried in deep grass, if it is located directly behind a tree or if the golfer will have his feet in an uneven position in relation to the ball.

Use in sentence: After hitting his drive in the middle of the fairway John was disappointed to find his ball in a bad lie after it unexpectedly came to rest within an unrepaired divot. 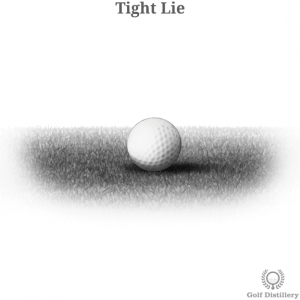 A tight lie refers to a situation where a golf ball is sitting up on very short grass or on hard ground. Although it is normally considered a somewhat good lie, it can lead to intimidating shots due to its unforgiveness; a golfer that does not strike the ball first will see the clubhead penetrate the ground instead or see the clubhead bounce off from the ground and hit the ball with the leading edge of the club.

Use in sentence: John was nervous at the prospect of his next shot, a tricky chip shot from a tight lie. 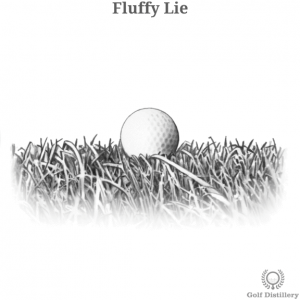 A ball whose lie is fluffy is one that will be sitting neatly on top of taller grass. A fluffy lie is normally considered good although it can lead golfers to hit the ball above the sweet spot of their club, negatively impacting the distance of the shot.

Use in sentence: John was happy to find his ball come to rest in a fluffy lie which gave him confidence to attempt a flop shot over a bunker.

More on: How to Hit from Fluffy Rough 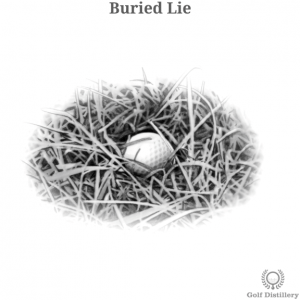 A golf ball will find itself in a buried lie when it is located deep in taller grass, such as the one found in the rough. Such a lie is considered bad because it will add difficulty to the golf shot, specifically since the grass will slow down the clubhead as it travels towards the ball, negatively affecting the distance. Shots made from buried lies also tend to shoot lower than they would normally which affects how far a ball will roll after landing.

Use in sentence: Because his ball was in a buried lie, John could not attempt to hit it using a fairway wood as he had originally planned. 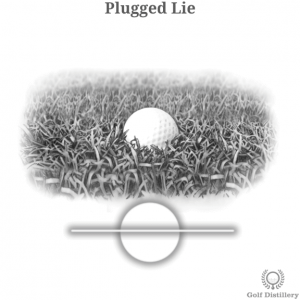 A plugged lie will occur when the golf ball does not bounce off from its exact landing spot, as it does normally. This can occur on the fairway when the soil is very soft following heavy rain, for example. The added difficulty is found in that the golf ball will not be sitting neatly on top of grass but rather will find a portion stuck underneath the ground, making it difficult to hit on the sweet spot of the club.

Use in sentence: Thankfully, John was able to lift, clean and place his ball out of a plugged lie thanks to the Spring rules that were in effect that day.

The fried-egg lie is a type of plugged lie that is found inside a bunker. Golfers will be faced with such a lie when the ball stays at the exact spot where it has landed, instead of hitting the bunker and bouncing off and rolling out of the crater.

Use in sentence: As he studied his upcoming bunker shot John wondered how he’d be able to slide his club under the ball which was located in a difficult fried-egg lie. 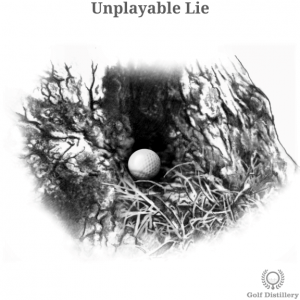 A lie is said to be unplayable when the ball is positioned in such a way as to make it virtually impossible to be hit by the golfer. For example, a ball coming to rest inside a shallow hole dug by a small animal will be impossible to hit using a golf club. Otherwise, a ball coming to rest high on a tree branch will also be unplayable in most cases.

Use in sentence: John was distraught to find his ball in an unplayable lie which required him to resort to a drop at the cost of a penalty stroke. 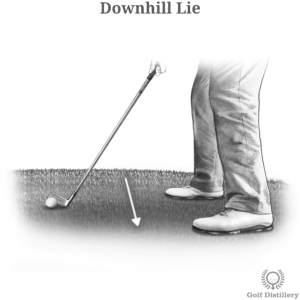 A golfer facing a downhill lie will see his forward foot (left for right handed) situated below the level of the ball and even more so than the level of his back foot. Or in other words, he will be situated on a hill that is sloping down towards the target.

Use in sentence: Although John hit a good drive down the center of the fairway his ball came to rest on a downhill lie, making his approach shot unexpectedly more difficult. 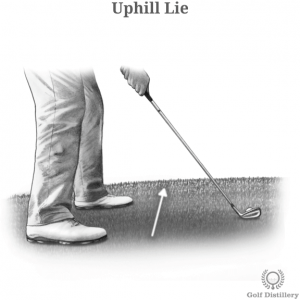 A golfer facing an uphill lie will see his forward foot situated on a higher level than that of the ball and of his back foot. In other words, he will be situated on a hill that is sloping up towards the target.

Use in sentence: John’s approach shot missed the green but the ball found itself on an uphill lie, setting the table for an easy chip shot onto the green.

A golfer facing a ball-above-feet lie will see both his feet situated below the level of his ball at address. In other words, he will be situated on a hill that is sloping towards him.

Use in sentence: Now faced with a ball above feet lie John had to be careful in setting up so that he did not hit a fat shot, which is commonly associated with such a lie. 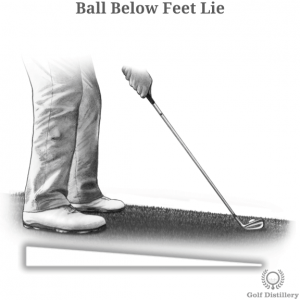 A golfer facing a ball-below-feet lie will see both his feet situated above the level of his ball at address. In other words, he will be situated on a hill that is sloping away from him.

Use in sentence: John had to make adjustments to his target line to account for his ball below feet lie, which tends to send the ball to the right of a target.

More on: How to Hit Golf Shots from Difficult Lies 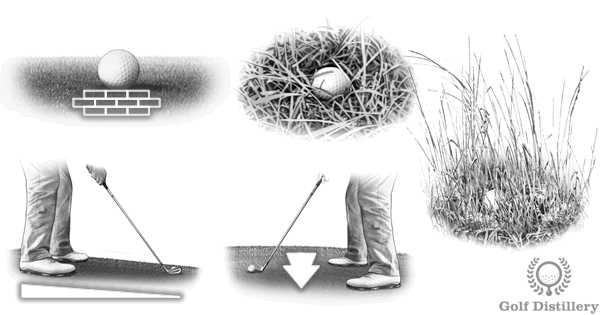