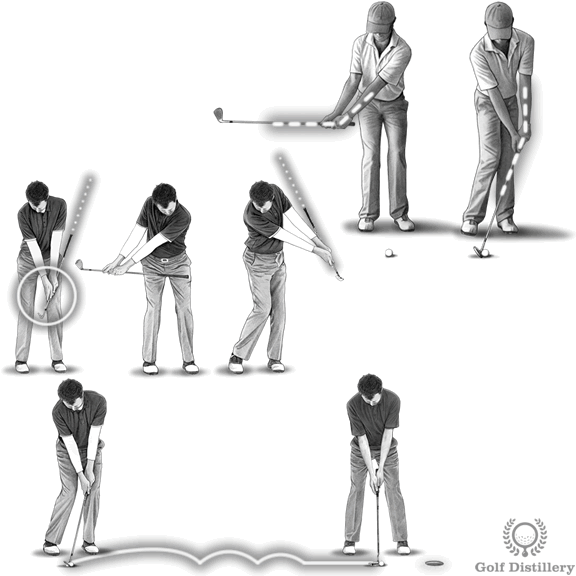 No matter how well you hit the ball there are times during your golf round where you will miss the green and find your ball only a chip shot away from the putting surface. Getting up and down through a nice chip that puts you in a position to easily one-putt is a great recipe for saving par when you do miss the green.

Follow the chipping drills below to get your chip shots into gimme range and save more pars during your golf round.

Don’t Flip your Wrists at Impact

This drill will train your hands to remain relatively quiet during your chip shots.

In essence, you will hold the club in your hands and let your shoulders roll back and forth without releasing your hands as you would for a normal shot. And in order to really understand the dynamics at play use the following trick:

Chip shots are delicate in nature and during an important round or match can be quite nerve racking.

By simplifying the action of the chip shot so that it resembles more that of a putt you should see gains in consistency. That’s because you will shield yourself from flicking your wrists which could lead you to skulling the ball and seeing the ball fly past the flag and across the putting surface.

Practice Chipping and Putting Them Out

This chipping drill takes place around the practice putting green and will require the wedge you use for chipping and your putter. It will train you to live with the consequence of a bad chip and will let you experience the reward of chipping the ball to within gimme range of the hole.

Follow these instructions to really focus on chipping it close:

With chipping sometimes the focus is on simply getting a good contact with the ball and seeing it roll towards the general direction of the hole.

With this chipping drill you will train yourself to really aim for your chip shots to come to rest really close to the hole. So close that converting your par through a one-putt becomes a formality.

Land your Chips Within 3 Feet of Different Flags

This chipping drill has you targeting different flags on the practice putting green. It requires the club you use for your chip shots and 6 balls.

Follow the steps below to train you to chip it close, no matter how close or far the hole is.

Become a Great Chipper, From Any Distance

This drill trains you to practice chip shots of different lengths.

You might find you are better at a specific distance from the green but it doesn’t mean you’ll only face that distance and chip shot when you go out and play. Practice hitting different lengths of chips so that you become comfortable with all of them.

Finally, try to see the balls coming to rest within your putter’s length from the hole.

In this chipping drill you will learn the air-to-roll ratio of the clubs you own and use when chipping.

It will see you practicing bump-and-runs where the ball will land on the putting and green and roll the remaining distance towards the hole. Since each club in your bag has a unique loft angle the clubs you use for bump and runs won’t produce the exact same shot. Some clubs will see the ball make a small hop in the air and roll quite a distance while other clubs will send the ball in the air and only roll a bit further upon landing.

Follow this drill to know which club to use when you just want the ball to land on the green and roll the rest of the way.

Get the Ball Rolling As Soon As You Can

Sometimes the right chip shot isn’t always to get the ball airborne for as long as possible so that it lands as close to the pin as possible.

Depending on the lie conditions and many other factors the best course of action oftentimes is to see the ball make just the hop necessary to clear the rough so that it lands on the putting green and starts rolling from there.

Knowing your air-to-roll ratios will help you determine the club you should be hitting in order to hit a bump-and-run that rolls up to within gimme range of the hole.

Finally, this drill will teach you the chipping technique that Phil Mickelson uses and advocates, the hinge and hold.

Follow the instructions below to learn this very easy to understand, reliable chipping technique.

Protects You from Mistiming Issues

Letting your wrists hinge slightly will increase the loft and distance of your shots, sending the ball a little higher and rolling nicely after landing.

The problems associated with hinging and releasing your wrists as you come towards impact is that you need to get the timing absolutely right or else the ball will shoot across the putting surface or your club will strike the ground first.

The hinge and hold technique removes this mistiming issue and turns a difficult, tricky chip shot into a reliable one that is easy to remember. Just hinga hold! 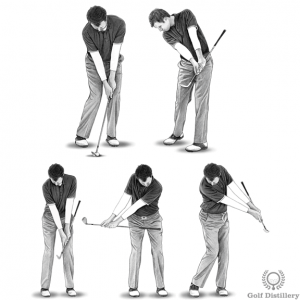