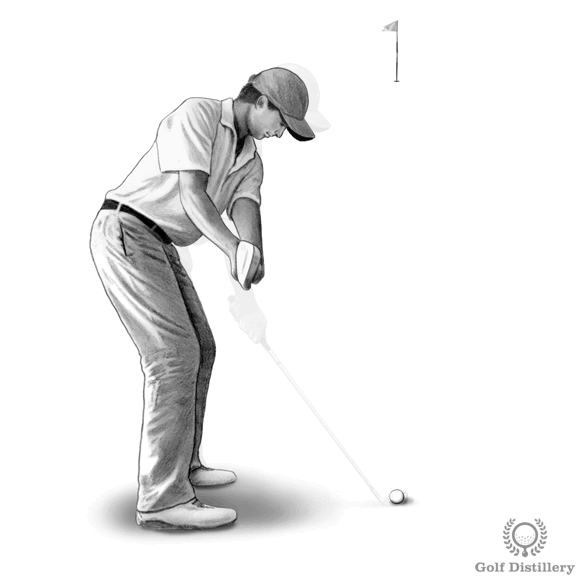 Also Known As: “Square takeaway” or “Point the shaft towards the target”.

This swing thought has you focusing on bringing the clubhead straight back so that when the shaft is parallel to the ground during the takeaway, the butt end of the grip is pointing at the target, straight ahead. This is in contrast to seeing the butt end pointing to the right or left of the target.

Quite simply, taking your club back into a square takeaway position promotes a straight ball flight that doesn’t feature much in the way of sidespin.

This stems from the fact that taking the club back squarely puts it in the correct position for an inside-square-inside swing path.

Golfers afflicted by fades or slices in their game can often find the explanation for them by looking at the path the club travels on. In these instances the club will travel using an outside-in swing path.

Similarly, golfers afflicted by draws or hooks can often find the root cause for them through a club that travels along an inside-out swing path.

Also provided the clubface is also square at impact, it should hit the ball while coming in straight at it in contrast to cutting across it.

A square takeaway really corresponds to the default takeaway one should adopt in his swing. When no sidespin is sought and the golfer is not trying to shape a shot or otherwise correct something, a square takeaway will be beneficial.