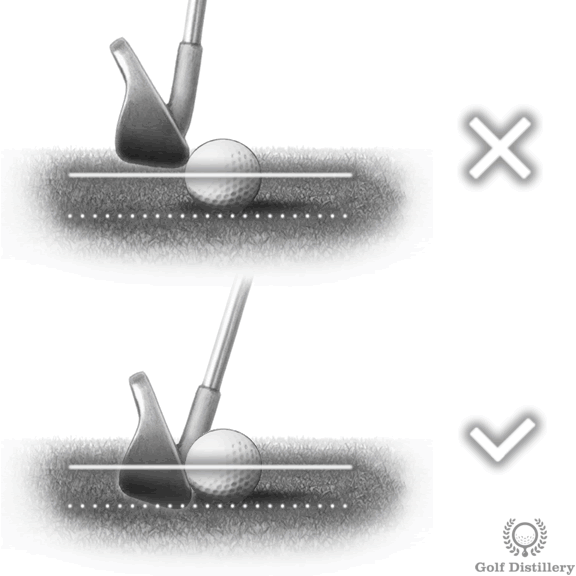 In contrast to a better shot that sees the clubface striking the ball inside its sweet spot, topping the ball will often see the leading edge of the club making contact with the ball instead.

This results in a ball that travels very low to the ground and doesn’t travel close to what a solid strike with the same club should produce. Because the clubhead doesn’t penetrate the ground no divot is ever produced, other than the occasional deep hole into the ground that occurs when the ball is pushed into the ground before it bounces off.

Continue reading to learn more about the root causes that produce topped shots and for fixes that will help you avoid topping shots.

Topping shots are caused by one of the three fundamental causes below. All have to do with the position of the bottom of the swing arc, either vertically or horizontally.

Cause #1: Bottom of Swing Arc Too High 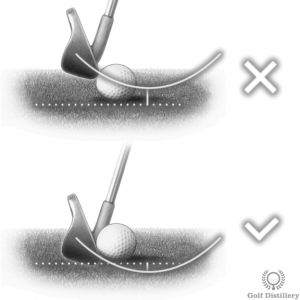 Topping the ball and seeing the clubhead striking the ball above its equator can be explained by a swing that stays too high, in one that doesn’t reach down enough to catch the ball cleanly on the sweet spot of the club.

Or in other words, it can be explained by a bottom of the swing arc that is simply too high in relation to the ball (and to where it should be).

Indeed, in a well struck shot using an iron for example, the bottom of the swing arc will be found slightly below the surface of the ground which will produce a nice little divot. A swing arc that never produces a divot simply stays too high (woods and putter categories of clubs excluded), and one that doesn’t reach down below the equator of the ball stays too high.

Cause #2: Bottom of Swing Arc Before the Ball (Too Soon) 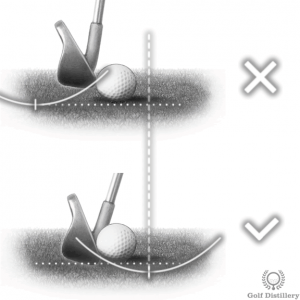 Another reason that could explain why you are topping the ball can be found in the horizontal position of the swing arc, rather than its vertical position explored above.

Yes, a swing that sees the bottom of the swing arc located behind the ball too much will not produce a pure strike and if far enough can result in a topped shot.

Instead of properly striking the ball – or trapping the ball – as the club is moving in a downward motion it may do so while the club is rising if the bottom of the swing arc is found a good distance from the ball, away from the target.

Cause #3: Bottom of Swing Arc After the Ball (Too Late) 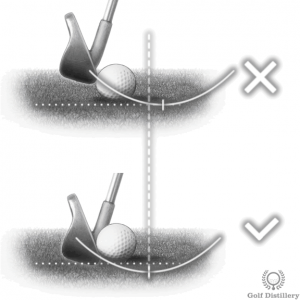 A similar reason to the one above sees the bottom of the swing arc being located in the wrong spot horizontally but in this instance, after the ball.

That’s because a swing that sees the bottom of the swing arc located too much in front of the ball will not produce a pure strike and if far enough in front will produce a topped shot.

While the club will correctly approach the ball as it travels down it will catch the ball above its equator if the bottom of the swing arc is too late in the swing, or in other words if it is located too much after the ball, towards the target.

The following golf swing errors can lead you to topping golf shots. Make sure none are to blame by going through the list and if you find a situation that resembles yours, read on for clues on how to fix and correct the situation. 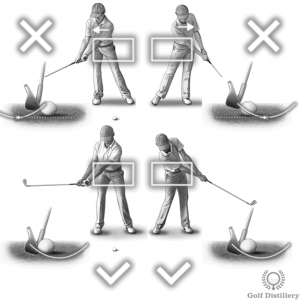 Swaying is a golf swing error that manifests itself in the lateral movement of the golfer during the course of his swing.

Particularly, it involves the lateral sliding of the hips back during the backswing and forward during the downswing. This is in contrast to the swing proceeding normally as the golfer’s hips are rotated while staying mostly in place, allowing for the upper body to rotate mostly along a central axis.

Sliding your hips back during the backswing and omitting to sliding them back to their correct position for impact can position the bottom of the swing arc behind the ball and ultimately to a shot topped.

Alternatively, sliding your hips forward aggressively during the downswing can position the bottom of the swing arc too much in front of the ball and again to a topped shot.

FIX: Lean in your right knee to restrict your upper body from sliding back during the takeaway and backswing

More on: How to stop swaying

Do you have a reverse pivot? 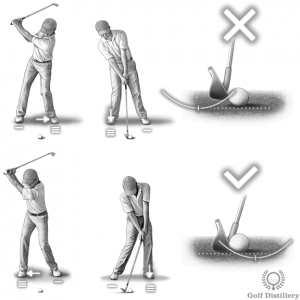 Your swing is said to suffer from a reverse pivot if you are moving your weight in the opposite (reverse) way.

In short, the weight transfer is reversed and notably, the position of the bottom of the swing arc is affected as well. By finishing with your weight on your right foot instead of your left, the swing arc will be moved back as well, and its bottom will be located behind the ball. As we’ve seen before, this is one of the recipe for a topped shot.

FIX: Focus on moving your weight back during the takeaway and backswing, instead of moving it forward.

Correctly executing this first step should help shield you from a reverse pivot and from topping balls.

More on: How to fix a reverse pivot

In addition to the swing errors above, some address and setup positioning errors can also explain why you are topping some golf shots. Review the following for possible clues.

Is that ball located too much forward, or too much back? 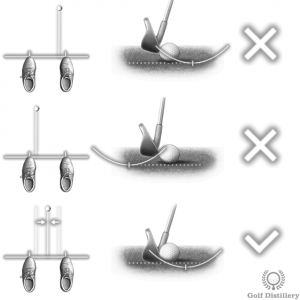 The way you position your feet while setting up can explain why you are topping golf shots. Indeed they can if you position them in a way that sees the ball located in the wrong position in your stance.

Specifically, a ball placed too much back in your stance can be difficult to hit cleanly. Such a stance will likely see the swing arc bottom positioned too far after the ball is hit.

Similarly, a ball placed too much forward in your stance can also prove difficult to hit cleanly but for the opposite reason. It will because the bottom of the swing is likely to be found in front, or before the ball is hit.

FIX: Favor positioning the ball in the center of your stance if you suspect the ball positioning could help explain your topping balls issues. 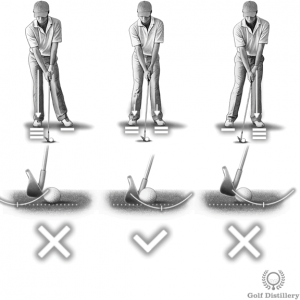 The way you choose to allocate your weight among your two feet at address can also lead to topped shots when done incorrectly.

In one instance, placing your weight too far on top of your left – or forward – foot can lead to your swing arc bottom being located behind the ball, and ultimately to a topped shot.

Similarly, placing too much of your weight on top of your right – or back – foot can lead to your swing arc bottom being located ahead of the ball, and again ultimately to topping the ball.

FIX: Favor a weight distribution that sees both feet supporting an equal amount of your body weight at address if you suspect tweaks here could explain your topped balls.

More on: Impacts of weight distribution across your feet in golf

Are you choking down on your club too much? Are your clubs too short? 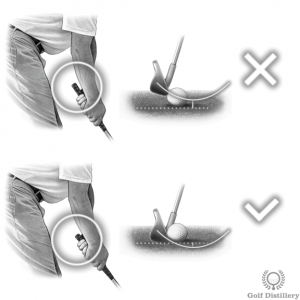 The reason your swing arc bottom is too high and is producing topped balls may lie with the shaft of the club itself, and how shorter it is than what it should be.

Otherwise, it is also possible that the clubs you are using are simply too short. This is often true for tall and very tall golfers that are using normal-length clubs bought from the rack at the store. In some instances, it may be a good idea to consider getting custom fitted in order to make sure the equipment you are using is in line with your physical attributes.

FIX: Hold the club higher on the grip when choking down and/or get custom fitted if you are very tall and suspect your shafts might not be long enough.

More on: When to grip down on your golf club

Are your shoulders sloping down? 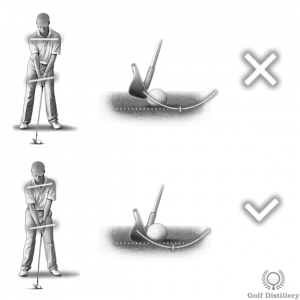 Another possible setup positioning error to consider when investigating the cause behind topped shots is the slope of your shoulders.

Ideally and in most scenarios your right – back – shoulder should be slightly lower than your left shoulder. This is because your right hand will be lower on the grip of the club than the left hand.

Failing to adopt this natural position can see you having both shoulders level between themselves and to the ground. Doing so, or worse seeing your left shoulder lower than the right will move your swing arc bottom forward.

FIX: Hold the club naturally in your hands and allow your right shoulder to be slightly lower than your left shoulder.

Are you hitting your shots thin instead of topping them?

Finally, it is also possible that you are hitting your shots thin and are not actually topping your shots. These two are quite similar. Follow this link for the checklist on how to fix thin shots.