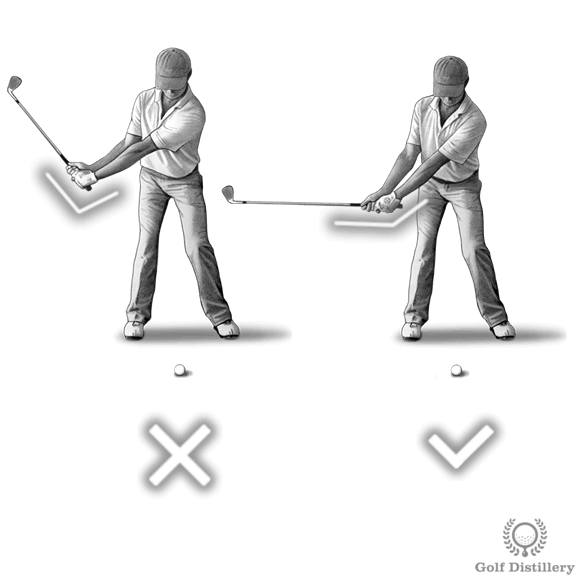 This swing thought has you focusing on keeping your wrists from becoming too active early in the takeaway and backswing. Rather, it encourages you to limit wrist hinge before the shaft is past being parallel to the ground, to where it should reach through shoulder roll alone.

Similarly to the move as a block swing thought, the swing key promotes a wide and full swing, which should translate to a ball that travels further. Indeed, hinging the wrists early reduces the total distance travelled by the clubhead and results in a swing that doesn’t feature its full breadth. The energy accumulated that could be transferred to the ball is therefore curtailed.

Golfers who have a tendency to let early handsy/wristy movements creep into their swings should benefit from remembering this swing tip. Indeed, relegating wrist cock to its correct timing should normalize the distance travelled by the ball to its full potential.

The golf swing is a meticulously organized movement flow that proceeds best when executed in the right order. Ideally, wrists start hinging at the end of the takeaway, or in other words, when the shaft of the club is parallel to the ground. They continue doing so gradually until the top of the backswing is reached at which point the wrists should be fully hinged.

Hinging the wrists early will break up the timing of sequences and may translate into wrists that end up unhinging too early during the downswing, which is known as casting and which leads to loss of distance.

Resisting the urge to get wristy early can be applied for most golf shots.

It is particularly helpful when facing delicate shots or when the nerves or otherwise shot anxiety creeps into the equation. An example would be a delicate chip from a tight lie during an important match or round.

When not to use?

You may want to avoid this swing key for certain shots such as bunker shots, where you would instead want to get the clubhead up early in order to promote a steep descending strike at the sand.

Otherwise, certain types of chip/pitch shots call for active wrists in swings with limited takeaway or backswing to begin with.