Golf Distillery / Golf Terms / Course Elements / Away From The Green 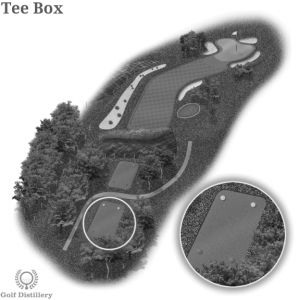 The area from where golfers will make their first shot on every hole, or in other words the starting point of any hole.

Teeing grounds are usually raised in relation to their surroundings and allow golfers to use a tee to lift the ball up from the grass, no matter what club they choose. They are usually situated inside long rectangles of short grass on which several sets of tee markers are positioned. A golfer will hit from behind the imaginary line formed by two tee markers of the same color that corresponds to the chosen level of difficulty. 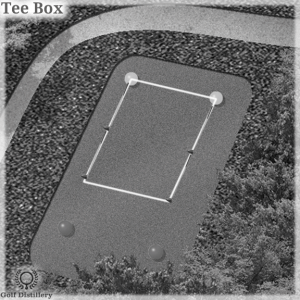 Although the two terms are often used interchangeably, technically the tee box represents an area within the teeing ground. Indeed, the tee box area is a rectangle delimited by the line between two tee markers on one set of sides and two club lengths on the other. The golfer is allowed to hit anywhere from that area without incurring any penalty. 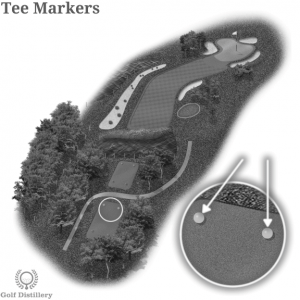 An object – often in spherical or square form – used to designate the area from which a golfer is to hit his ball while on the teeing ground.

Any golf hole will normally offer a choice of several sets of tee markers, each differentiated by a distinctive color. For example, a golf hole may offer the choice of red, white, and blue tee markers.

Red tee markers are normally reserved for ladies while black or blue are often located the farthest away from holes, and thus best suited for the better golfers.

At the beginning of a around, golfers will agree on a set of tees to use, realizing that this decision will tie them to those tees over the entire round. Indeed, a golfer is to start every hole from the same set of tee color throughout the entire round. 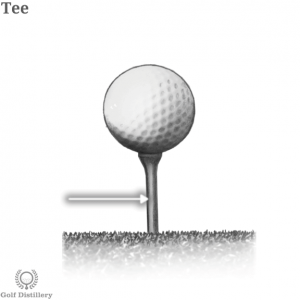 A small stick-like object – traditionally wooden in composition – that serves the purpose of holding a golf ball up from the grass.

At the bottom end, a tee will have a pointed tip which will allow the golfer to stick it in the ground. At the other end, a small concave surface will serve to prop the ball up and keep it from falling to the ground.

The tee is mostly associated with shots made using a driver. Golfers can elect to push the tee deeper into the ground in order to use with clubs that don’t have sweet spots placed as high as is the case with the driver.

More on: How to set the correct height of your tee 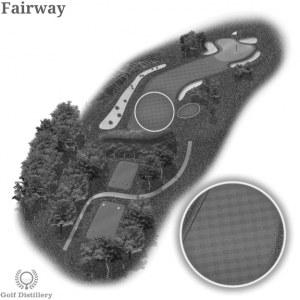 Anchored and running along the middle path of a golf hole, the fairway begins shortly after the teeing ground and ends just shy of the green.

It serves to define the way forward and in doing so provide a target for golfers as they proceed towards the green. Fairways feature grass that is cut relatively short and offer fewer challenges, in contrast to other regions of a hole.

Notably, it is possible for a hole to not display any fairways, such as on par-3 holes with island greens, for example. 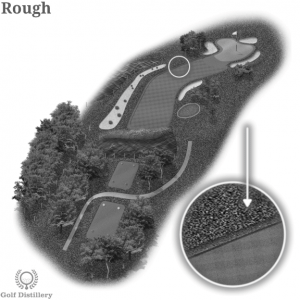 Consisting of the area located outside of the fairway (generally speaking), the rough features grass that is kept taller than the ones found on the fairway or green.

The purpose of the rough is to add difficulty to an upcoming shot if a ball is to come to rest within it. It is meant to penalize golfers who are unable – or choose not – to hit a shot onto the fairway or onto the green. Indeed, golfers will be smart to try to avoid seeing their balls come to rest in the rough as the added length of the grass increases the difficulty level significantly.

Balls that land in the rough will also roll a shorter distance than they would have if they had landed in the fairway, noticeably impacting the length remaining to the green following a drive, for example. 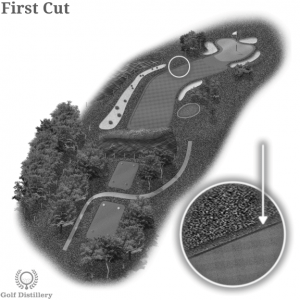 An optional margin found between the fairway and the rough, the first cut features grass that is kept at an intermediate height between the ones found on its two sides.

This margin is relatively narrow in comparison to the size of the fairway, oftentimes measuring approximately a yard across or even less. 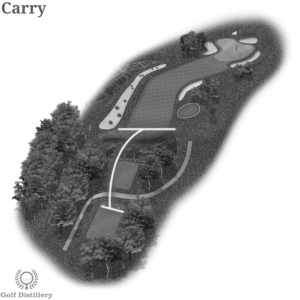 The term carry refers to a distance that is required for a ball to stay in the air in order to successfully travel across a forbidding area such as a lake or tall grass.

Carries are often calculated for shots from the tee box where there is an area to clear before reaching the rough or the fairway. Carries are also calculated when a water hazard is positioned directly in front of the green, giving the golfer an indication as to how far his ball must remain in the air in order to stay dry.

Golf architects use carries in their designs for several reasons. For monetary reasons, carries can be proposed as a way to reduce maintenance costs that would otherwise be associated with cutting grass to the height of rough or fairway. They can also be implemented in order to add difficulty to a hole, where taking a direct line to the green must be done over a water hazard, instead of the safer but longer route alongside said lake.

Otherwise, carries can consist of areas that are left untouched during the construction of a golf hole, preserving its natural look. 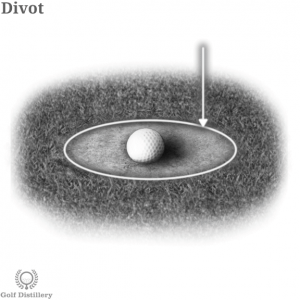 A divot refers to a section of grass that is ripped from the ground by a golf club during a swing. These can vary in sizes depending on the club selected as well as by the steepness of a golfer’s swing. Divots may remain whole or break apart before finally falling to the ground.

In order to provide every golfer with the same fair playing conditions divots are to be replaced back to their original spots every time they are created. It is considered very rude and disrespectful not to replace one’s divot after a shot.

On a well executed iron shot, a divot will normally start where the ball was located. In other words, the club should hit the ball first before continuing its descending motion into the ground and in the process creating the divot.

What should my divot pattern look like when hitting balls at the range?

Unless you are hitting balls from an artificial turf platform you will undoubtedly create lots of divots during the course of a practice session at the range. If you’d like to make life easier on yourself when choosing where to place your ball for your next shots, you might want to adopt the following recommended divot pattern strategy.

Typically, golfers place and hit balls wherever they find a nice patch of grass. Over the course of a practice session using this method, divots will be created randomly next to one another, with a margin a grass outside of each.

A golfer wishing to best use the grass offered to him will use the following method instead. As soon as your first divot is created place the ball for your next shot just behind the start of the divot in line with the same target. If done properly, the ball will stand just on the edge of the divot but the area where you place your club at address will be fully grassed. Keep placing your next ball behind the divot and you’ll eventually end up with one long divot instead of a scatter of divots, which unduly waste precious grass real estate.