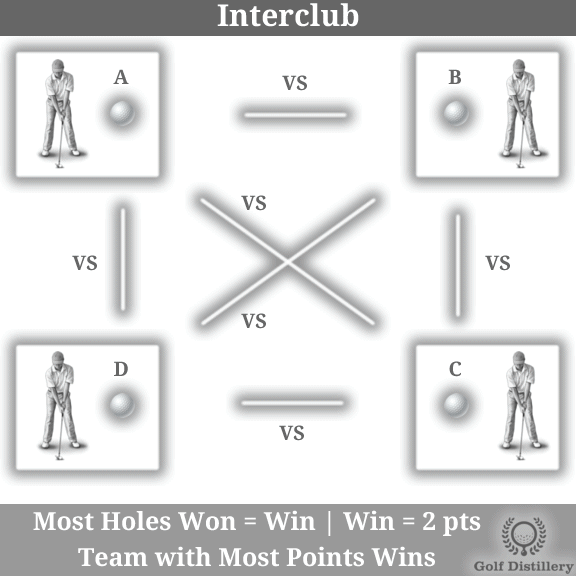 A competition that uses the interclub format will see golfers from one club forming a team that will compete against 3 other like-minded teams using an adaptation on the standard individual match play format. The winning team will be the one whose members have collectively accumulated the most points through match ties or wins.

How to Play Interclub

Each team sends one of their members to a foursome so that all groups are assembled using 4 golfers who hail from 4 different clubs. Each golfer hits his own ball throughout the round and each will be engaged simultaneously in 3 different match play matches, one with each of the members of the foursome. After each hole, scores are compared and each player determines if he has lost, tied, or won the hole for each of his 3 matches. A golfer has won a match when his lead is greater than the number of holes left to be played, leaving no chance for a possible comeback from his opponent.

The team with the most total points will win the interclub match using the following scoring scheme. A golfer who wins a match will bring his team 2 points and if he ties 1 point. If he loses he brings zero points for that match. Each golfer can thus contribute a maximum of 6 points to the team, or 2 points for each of his three matches. An alternate scoring format sees a win equal 1 point and a tie 1/2 a point.

Winning all three matches mid-round: If any golfer succeeds in winning all three of his matches before the end of the round he is to exit the group immediately and head on back to the clubhouse. The same applies for a golfer who would lose all three of his matches during the course of the round. This ensures that all participants who are still playing are still alive and are not slowing down or helping the other players still involved in their own matches.

Scoring: Instead of seeing a win be worth 2 points and a tie 1 point, in some instances winning a match will be worth 1 point and tying a match half a point. The scoring variation used is left to the organizing committee.

Club Ranking: The interclub format is used extensively in order to rank golf clubs that belong to the same geographical region. For example, a specific region could decide to hold interclub competitions each year in order to rank the clubs in its region. Inside the brackets, the winning team out of the four would be promoted to the bracket above for the next year’s competition and the losing team would be downgraded to the bracket below. After the competition has matured, the top clubs would be battling it out in the top brackets while those below would try to climb up the ladder or at least try to hang on and not be downgraded to one below.